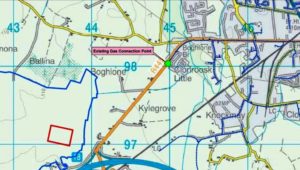 DESPITE 216 objections, which included one from a Government Minister, planning officials at Laois County County Council have given the go ahead to Bord na Móna Powergen Ltd to construct an anaerobic digester gas renewal plant in Portlaoise.

The development is to be located at Clonboyne and Clonkeen near Junction 18 off the M7 Motorway, just 2km from Portlaoise town centre.

Board na Móna plans to build its plant which takes in food and animal waste and digests it down to produce gas for the national grid and use the left over by-product as fertilizer for farms.

The company estimates that the proposed development will treat up to 80,000 tonnes of non-hazardous, biodegradable, organic material per year. The material to be treated will include a combination of commercial food waste, brown bin waste, animal slurries from cattle, pigs and poultry, purpose-grown crops such as grass, silage and maize and food processing residues from dairy and meat processors.

It is anticipated that the construction phase of the proposed development will take approximately 18 to 24 months and that up to 180 jobs will be created during this period.

According to the company in it’s planning application (19/530), “the proposed development will positively directly affect employment in the area through the provision of an estimated six to eight further long-term, full time employment positions over a shift working patterns Monday to Friday 8am to 6.30pm and Saturdays 8am to 1pm.”

The company also estimates that up to 35 drivers will be employed directly and indirectly to transport feedstock to the facility and digestate from the facility as well as “maintenance and engineering contractors and other service providers.”

The company also, in its planning application, stated: “It is considered that the proposed development will have a short-term positive impact in terms of local jobs creation and the local economy.”