Laois at the bottom of the pile – again 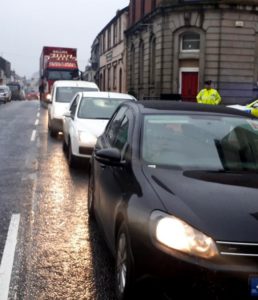 Traffic congestion is a regular occurrence in Mountmellick

Laois is bottom of the national league when it comes to funding road infrastructure.

According to Sinn Féin TD Brian Stanley “Laois is at the bottom of the pile of Transport Infrastructure Ireland (TII) grants for 2021.”

The Portlaoise based TD said: “Laois fared very poorly when it comes to the divvy out of road infrastructure funding for the current year with important projects in the two counties not even getting a look in.

“While County Cork will receive over €87 million and Mayo €78.3 million, Laois has been allocated just €1.5 million, putting it at the smallest allocation in the 26 counties.

“Despite the fact that Laois has important national routes traversing the county it has been left behind and means that badly need projects such as the Mountmellick Relief Road, the Portlaoise Northern Orbital Route and the Durrow N77 Bypass are been ignored by Government and TII.”

Deputy Stanley said: “Mountmellick in particular is in urgent need of the construction of the N80 bypass. This has been promised for years with no progress being made. Laois County Council carried out a feasibility study on it last year and design works have been advanced, but without government funding it will not go anywhere.

“In reply to a parliamentary question I put to the Transport Minister last autumn he informed me that Mountmellick was not included in what he referred to as the Governments “strategic and financial framework for the National Roads Programme for the period 2018-2027”.

“This is simply not acceptable. It completely ignores the fact that Mountmellick has serious traffic problems, in particular with trucks choking up the town centre. It also ignores the importance of the N80 in terms of it being one of the major national routes connecting the Midlands and the West to the Port of Rosslare. This is more significant now with Brexit as a lot of hauliers are now using this route to get goods to and from the Continent directly, instead of using Dublin Port and travelling through England.

Government must recognise the Strategic importance of the Midlands and start investing in some of these long awaited and badly needed projects.”