‘The State failed’: Taoiseach apologises to survivors of mother and baby homes 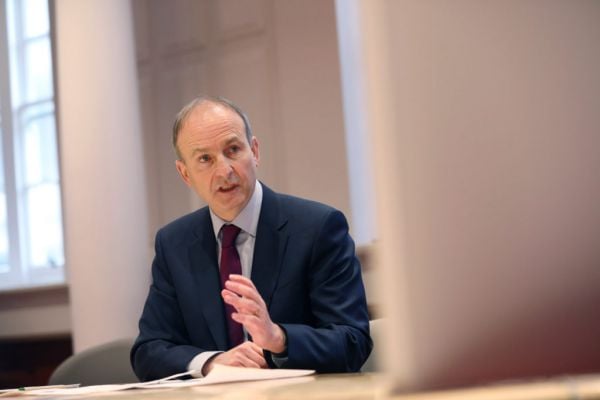 Taoiseach Micheál Martin has apologised on behalf of the State to former residents of mother and baby homes for the way they were treated over decades.

In a statement in the Dáil on Wednesday, Mr Martin said the report into the institutions highlights a “profound failure” of empathy, understanding and compassion over a long period.

“It is the duty of a republic to be willing to hold itself to account,” he said.

“To be willing to confront hard truths and accept parts of our history which are deeply uncomfortable.

“This detailed and highly painful report is a moment for us as a society to recognise a profound failure of empathy, understanding and basic humanity over a very lengthy period.

“Its production has been possible because of the depth of courage shown by all those who shared their personal experiences with the commission.”

Giving his apology, Mr Martin said: “On behalf of the Government, the State and its citizens, I apologise for the profound generational wrong visited upon Irish mothers and their children who ended up in a mother and baby home or a county home.

“As the commission says plainly – ‘they should not have been there’.

“I apologise for the shame and stigma which they were subjected to and which, for some, remains a burden to this day.

“In apologising, I want to emphasise that each of you were in an institution because of the wrongs of others. Each of you is blameless, each of you did nothing wrong and has nothing to be ashamed of. Each of you deserved so much better.

“The lack of respect for your fundamental dignity and rights as mothers and children who spent time in these institutions is humbly acknowledged and deeply regretted.

“The Irish State, as the main funding authority for the majority of these institutions, had the ultimate ability to exert control over these institutions, in addition to its duty of care to protect citizens with a robust regulatory and inspection regime.

“This authority was not exerted and the State’s duty of care was not upheld. The State failed you, the mothers and children in these homes.”

The apology follows the publication on Tuesday of the report of the Mother and Baby Homes Commission, which showed 9,000 children died in such institutions between 1922 and 1998.

In all, 15 per cent of the approximately 57,000 children who were in the 18 institutions investigated by the commission died during their time there.

Following Mr Martin, Tánaiste Leo Varadkar also offered his apologies to the former residents of mother and baby homes, saying the Report is the “story of a buried past, uncovering buried lives, and a buried truth”.

Church and State re-enforced social prejudice and judgement when they should have tried to change it.

Mr Varadkar added: “Women pregnant outside of marriage, some very young, some victims of rape, were not supported by their families or by the father of the child.

“They were forced to turn to the Church and State for refuge, and while they got refuge it was a cold and often cruel one.

“Church and State ran these homes together, operating hand in glove, equally culpable, and did so with the full knowledge and acquiescence of wider society. Church and State re-enforced social prejudice and judgement when they should have tried to change it.”

The Tánaiste said Ireland for too many years was a “cold house” for children born outside of marriage, with the Report exposing “the chilling consequences of such a mindset”.

“Too many children were seen as a stain on society, but the truth is that it was our society that was deeply stained,” Mr Varadkar said.

He added restitution should be guided by the men and women who survived the institutions, giving them time to read the Report in its entirety and reflect on it before informing the Government of what should happen next.

“This Report teaches us that when good people believe bad things about others then terrible actions can be rationalised away.

“There are lessons here for us as a society and a State today. A meaningful response has to go beyond denouncing the horrors of the past from the safety of the present,” the Tánaiste said.

“Today is a day of atonement, when we express our horror and sorrow at the story of Ireland told in this Report, when we promise to do right be those who suffered.

“We cannot change that past, but we can rededicate ourselves to giving people their truth, recognising the hurt and damage that was caused, saying sorry and making amends,” he added.

Earlier during Leaders’ Questions, Mr Martin had come under pressure over the report, with People Before Profit TD Richard Boyd Barrett saying it diminished the culpability of the institutions of the Church and State, and dispersed their responsibility.

Mr Martin insisted he in “no way” sought to diminish the role of the Church or the State in the treatment of women and their children in mother and baby homes.

He told the Dáil: “My remarks and my statement yesterday in no way sought to diminish the role of the churches or the State, and any reading of them would confirm that.

“I spoke of the perverse moral code overseen by the church that, in my view, was responsible for this in terms of its attitude to sexual morality which was at the heart of forcing women and mothers in particular into mother and baby homes.”

“I equally believe the State clearly failed,” he added.

He said he was “concerned” that some people were endeavouring to portray his statement in a “certain light”.

“What happened was shameful and shocking. The report itself, I would not describe it as a sham, an insult,” he added.

The Taoiseach said it was “wrong” to claim there was Government involvement in the report.

“There’s been no involvement between Government and commission. The commission is fully independent,” he said.

Mr Martin said the report and its recommendations are very clear that the mothers should not have ended up in these homes and said the Government’s response would be “survivor-led”.

“The commission was independent,” he added. “No politician had any hand, act or role in the deliberations of the commission itself.” – Additional reporting: PA

A new webpage with information specifically for former residents of mother and baby homes has been set up at hse.ie. Additional mental health supports provided by the HSE are also available to former residents. Details of these supports are available on yourmentalhealth.ie.

Filed under: Mother and Baby Homes