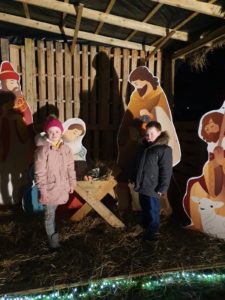 A LIVE animal crib raised a whopping €7,360 for three Laois charities over the Christmas period.

The crib, which was located at the home of Helen Kelly on the Stradbally to Portlaoise Road, was filled with donkeys, calves, alpacas, chickens and other animals, along with cardboard cut-outs of Joseph, Mary and the three wise men. An effigy of the infant Jesus was placed in the crib on Christmas Eve by two members of the Midland Downs Syndrome Association.

Beneficiaries from the initiative were the Portlaoise branch of Down Syndrome Ireland, Laois Hospice and The Arch Club, an organisation which organises social events for young adults with learning disabilities and special needs.

“It was great, and what made it even more special was that it brought such a positive vibe around the place during what has been a very difficult time,” said a delighted Helen.

“Everyone seemed to love coming out to see the crib, especially the kids. It was great seeing families coming together, smiling and getting into the festive spirit.

“Having the live animals, particularly the alpacas, made a huge difference,” added Helen, who said that all of the visitors were respectful and obeyed all of the Covid-19 rules and restrictions. She also paid tribute to everyone who helped in any way to make the event so successful, particularly Declan Dunne from Portlaoise Parish Centre, who handled financial matters.

While most of the money came from cash donations at the farm, others made online contributions. And the fund received a huge boost when local businessman Aidan Kelly from Blue Sky Financial made a €1,000 donation.

Helen would also like to thank the Barback lads for erecting the crib, Martin Kelly who looked after the lights, camera and looked after Rudolf, and local company Mochua Print, who printing the crib figures, free of charge.