Obituary – Killeshin and Laois say farewell to a goalkeeping legend 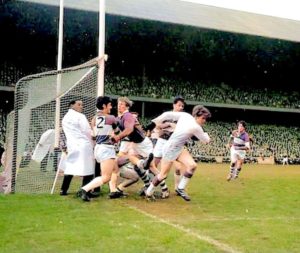 The late Tony Burke in action for Laois in Croke Park

THE death of Tony (Stoney) Burke of Killeshin on Sunday 13 December caused great sadness in his native Killeshin and throughout football people in south Laois.

Tony resided at 33 Eastwood Road, Goodmayes, Ilford, England for many years and passed away at St Bartholomew’s Hospital, London.

Killeshin on the Carlow border always produced skilful footballers but never enough at the one time. Tony played every grade with Laois minor, under-21, junior and senior a rare achievement.

Before Tony, Liam Doran and Sean Price with the crew cut represented the club in two Leinster senior finals but they ended up on the losing team to Dublin on both occasions. Add in a two point defeat to the same opposition in the semi-final in ‘62 and a three point loss in ’64 and Liam knew what heartbreak was all about.

Imagine then when he travelled to Newbridge in ‘65 as a spectator for the minor final when, against all the odds, Laois beat Offaly by six points and a 15 year old neighbour, Tony Burke was picking up a Leinster medal that had eluded himself and Sean and many other great players over that period. Liam unashamedly rushed to congratulate the juvenile with a great future.

A year later Tony was first choice goalkeeper making his debut in Athy on 30 April when Kilkenny were no match for the champions. Next up was the short trip to Dr Cullen Park where a big Killeshin crowd saw the champions easily account for Wexford. Now came the real test against Offaly in the quarter-final and the game was staged in Croke Park. Offaly were also involved in the senior game which meant they had the biggest support but, as the reports showed, Laois had the best players.

Several of the Laois lads had the experience of playing Down in the drawn All-Ireland semi-final the previous year but Offaly also lined out several players from that six point loss in Croke Park. Tony was making his Croke Park debut One of the greatest displays by any Laois team in Croke Park saw a full time score of Laois 5-17 Offaly 1-8.

Next up was a trip to Tullamore for a semi-final meeting with Longford where Laois advanced to a second successive final. With word reaching Tullamore that Dublin had beaten Meath in the other semi-final this was a bit of a damper but for some reason the final was staged in Newbridge rather than Croke Park with the senior decider. This was a bit of a lift for the O’Moores but Laois had not beaten Dublin in minor since ‘64 in Tullamore and had lost the other six meetings.

Needless to say Newbridge was packed on Sunday 30 July for a cliff hanger, Dublin led early on but the champions showed their mettle. Then Dublin got a second goal to lead coming down the straight but Laois struck back with a great goal. In a nail biting finish Laois hung on to retain their title on a score line of 1-8 to 2-4. History was made, Laois beating Dublin in a provincial final and Tony had become the most decorated footballer in Killeshin.

There was more drama in Croke Park on 20 August when Laois beat Roscommon 2-8 to 2-7, more nails bitten before 60,000 had gathered to watch Peter Darby lead the Royal County to defeat Mayo.

However no nails bitten in the All-Ireland final when a huge Cork team crushed a nervous Laois outfit on a day to forget. However, Tony had become the first man from the club to represent Laois in an All-Ireland final.

A year later Laois, with Tony still between the uprights, beat Wexford, then hit Carlow for eight goals. Next up were Kildare and a six point victory and off to Croke Park for a semi-final meeting with Louth. This was a close call Laois winning by just two points. On the other side of the draw Dublin beat all before them and this time Laois faced them in Croke Park on 21 July where Dublin got their revenge winning 1-11 to 0-8.

Cork knocked out Dublin in the All-Ireland semi-final and retained their Crown beating Sligo by a single point more heartbreak for the West. Cork completed three in a row in sixty nine beating Derry so when Laois fell to Cork they were competing against a very special Cork outfit.

Meanwhile back to 1968 when Tony won his third Leinster medal. He lined out with Laois juniors who beat Westmeath after a replay in the Leinster final but Mayo beat them in an All-Ireland quarter-final in McHale Park, Castlebar by 1-7 to 1-3. True to form Mayo then fell to Tyrone in the home final by a point and, interestingly, two Laois men played in the All-Ireland final with London Portlaoise man Cyril O’Meara and the Heath man Mick Dora.

Tony played his last minor championship game in 1969 down the road in Dr Cullen Park on 4 May. The opponents were the Sky Blues and the champions had eight points to spare. A minor career that began Carlow ended at the same venue four years later.

However, by now Tony had been called on by the under-21 selectors and made his debut in the grade against Longford in Portlaoise on 6 April. Laois won by five points and then they headed to Tullamore to face the home team who had beaten Laois by ten points a year earlier and in 1967 beat Laois by twenty. But, Tony had never lost to the Faithful County and he did not lose here either Laois winning 3-9 to 2-7.

Laois were now in their first under-21 final since ‘64 and for Tony it was on home ground, you might say, Dr Cullen Park on Sunday 10 August before a huge attendance. There was a large Killeshin following naturally as Laois faced Wicklow, who never won in this grade, but they made a bold bid. However, a great save by the Killeshin man late in the game ensured Laois prevailed by the narrowest of margins 2-7 to 2-6.

Next stop was Hyde Park in Roscommon where the Rossies, captained by the late Dermot Earley, sent Laois packing on a score line of 2-15 to 0-9.

Offaly knocked out Laois in the opening round the following two years but Tony went on to join the Laois senior panel in the early ‘70s.

The Killeshin club chose him as captain for the junior championship that year (1969) and they reached the final where their unlikely opponents were Rathdowney. The final was delayed as Rathdowney were also in the senior hurling final but on 9 November Tony led out the men in green and it was not a classic by any means but, not having won since winning intermediate in 1958, Killeshin did not care as they held on to win 0-10 to 1-2. The team included three Doran brothers and the one and only Sean Price the hair a little thinner now. Tony lifted the Shaw Cup and Christmas had come early.

Another club medal was earned in 1974 when Killeshin beat Ballyfin in the intermediate final 0-8 to 0-2. There were three Whelans in the side when captained by Eddie, and three Dorans but no goals at either end. Ballyfin included three Dunnes and three Phelans.

In 1981 Tony added a league medal when they beat Mountrath captained by Christy Maguire after a replay.

Tony was brought home for burial in his native Killeshin on Sunday 27 December. Fr John Dunphy PP celebrated the Requiem Mass in the Church of the Holy Cross for the former parishioner. He recalled the young man who left Killeshin and went on to be a very successful business man across the water who married Pauline from Kilkenny.

On behalf of the Killeshin GAA club chairman Liam Dowling spoke of a great servant whom he knew for many years and how he was missed when he left over 30 years ago. But his name would never be forgotten in Killeshin for the honour he brought to his native club and how he represented Killeshin with pride when he donned the blue and white at every level.

Liam then thanked everyone who had helped the family bring Tony home in difficult circumstances and he thanked the family for inviting him to pay tribute to a lifelong friend.

Due to Covid restrictions only family were allowed attend the church but all along the route from his home in Ballickmoyler, from early morning, friends, former colleagues, neighbours and representatives from adjoining clubs stood in silence as the cortege made its way to the church. After Mass Tony was laid to rest in the adjoining cemetery.