Something fishy going on here 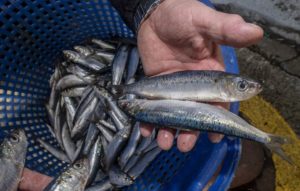 Marine biologist and director of Dingle Ocean World Kevin Flannery with some of the 100 tonnes of sardines that were landed in Dingle recently.
Photo: Domnick Walsh

As millions of sardines become the latest Mediterranean species to arrive in Irish waters in unprecedented numbers, a leading marine biologist is calling on the State to examine the phenomenon.

In recent days, over 100 tonnes of sardines were landed in Dingle Harbour.

It comes in the wake of reports of warm water octopuses on the south coast and a record-breaking haul of anchovies in Kerry in the past few weeks – all species normally found off southern Europe.

The director of Dingle OceanWorld Kevin Flannery said he was astounded by the sheer volumes of warm-water fish turning up on the Kerry coast, “This is incredible. This could change the whole ambit of fishing. It’s fascinating, you have these Mediterranean warm-water species arriving in huge volumes in Irish waters.

They would normally be down in the north and west of Spain and in Portugal. If these are moving in the temperature is right for them and the conditions are right for them.

“We’ve had three specific species that could be commercially developed since Christmas which are anchovies, sardines and octopus. It’s showing what is in our waters and what climate change is making. I have to call on the State agencies, and the Department of the Marine to take action because there is a resource and a potential.”

Mr Flannery said fishermen off the Cornish coast in England are getting up to £2,000 a tonne catching anchovies and that a record-breaking haul of anchovies caught in Kerry in recent weeks only made a fraction of the price because markets haven’t been developed for the warm-water species.