This Week Ten Years On sport was in full flow 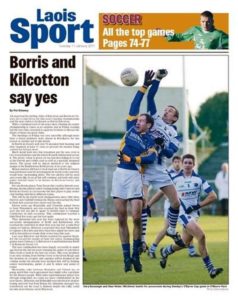 IN stark contrast to 2021, ten years ago the GAA season was up and running. Laois footballers were out in O’Byrne Cup action in O’Moore Park where sneaked a one-point win over Wicklow. But Justin McNulty admitted after the game that the visitors were the best team on the day. 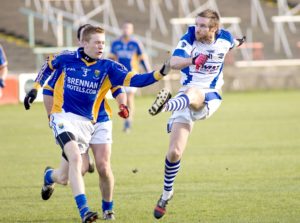 Colm Parkinson places the ball between the posts for Laois against Wicklow Photo: Denis Byrne

The hurling clubs of Kilcotton and Borris-in-Ossory confirmed they were to join forces for the 2011 hurling championship and the new club was to be known as Borris/Kilcotton. With a combined total of 126 years since winning the senior championship it comes as no surprise when the two clubs convened at separate locations to discuss their future. 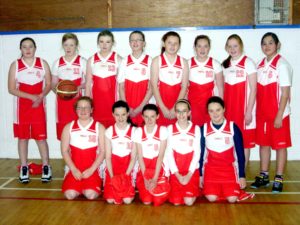 Kestrels Basketball Club bounced into the New Year with three teams playing and winning a total of six matches. The Portarlington/Killenard based club was eager to get into action again after the recent bad weather forced cancellations of some of December’s matches. 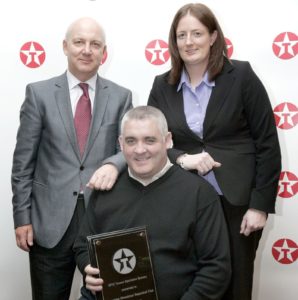 The year ahead promised to be a busy one for Clonaslee Wheelchair Basketball Club as it prepared to take advantage of its recent award of a €5,000 Texaco Sportstars Bursary. The proceeds of their success was used to purchase ten basketball wheelchairs, basketballs, a white board and two portable baskets. 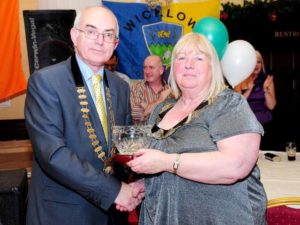 Years of diligent work on behalf of athletics and athletes by Portlaoise woman Eileen Hayes was recognised when she was presented with an Outstanding Service Award by Leinster Athletics. Dozens of friends and North Laois AC members joined the Hayes family in Carlow to celebrate with Eileen as tributes were paid to her for her many years of Trojan work for athletics. 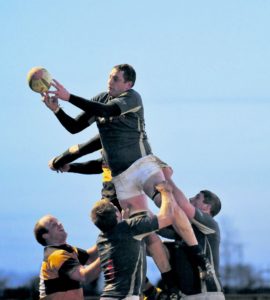 Portlaoise RFC firsts took the long road to New Ross for their Leinster League outing and should have been happy to come away with the win that moved them up to fourth position. But the win came at a price as not one, but two players received serious injuries that could rule them out for a long period. Long serving second row Graham Peavoy sustained a very bad knee injury and was replaced by Eoin McEvoy who also badly injured with what is thought to have been a dislocated shoulder. 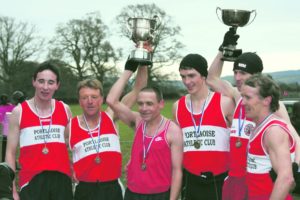 After weeks of enforced inactivity due to the inclement weather, there was a welcome outing to Ballyroan for Laois athletes for the Junior Men’s, Senior Men’s, Senior Ladies Cross Country Championships where Portlaoise AFC recorded a triple of gold medal wins.