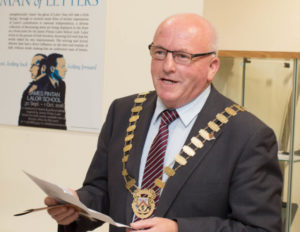 The Emo-based councillor, who has been absent from the council since last summer due to illness, confirmed his decision to resign today.

A county councillor since 2009, he tendered his resignation in a letter to council chief executive John Mulholland.

He said: “I am writing to inform you that, regrettably, I am resigning my seat on Laois County Council for health reasons.

“It has been a pleasure to serve as a local public representative for almost twelve years and I wish all members of the Council and Council staff the very best in your continued work.

“May I also take this opportunity to thank you for your support and kind wishes over recent months.”

First elected in what was then the Emo area in 2009, Cllr Mulhall retained his seat in the new Graiguecullen-Portarlington district in 2014 and in the last local elections in 2019.

He was elected Cathaoirleach of Laois County Council in 2016/2017 and has also served as leas-Cathaoirleach.

Deputy Charlie Flanagan led tributes to the long-serving councillor today, as he said:

“It is with great sadness that I learn of the early retirement from Laois County Council of my good friend and colleague Cllr Tom Mulhall. It is also a very sad day for the electorate in the wider Portarlington- Graiguecullen area and especially for the Mulhall family and Tom himself.

“Cllr Tom Mulhall was a dedicated and committed public representative for many years. He worked 24/7 for his constituents in the Portarlington- Graiguecullen Electoral area and he is widely respected for his role in politics and community affairs.

“It is also a sad day for the Fine Gael party, as Tom is very proud of his membership.

“While there were many highlights to Tom career, we were all particularly proud of his year served as Cathaoirleach of Laois County Council in 2016/2017. Cllr Tom Mulhall will certainly be missed for his high work rate across the Portarlington- Graiguecullen area and in particular Portarlington, Killenard, Stradbally, Emo, The Heath, Ballybrittas, Vicarstown and Jamestown.

“On behalf of the Fine Gael party in Laois, I wish Tom a return to good health and every luck for future endeavours for himself and his family. On my own behalf, I wish to thank Tom for his personal support to me in my career over the years.”