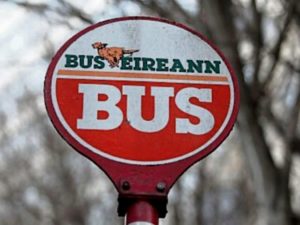 The Minister of State in the Department of Finance and local TD Seán Fleming has branded the decision of Bus Éireann to cancel their Expressway Route X12 from Limerick to Dublin which includes Portlaoise an absolute disgrace.

Minister Fleming has now requested a commitment from the semi-state company that they will reinstate the route to its normal capacity after the Covid restrictions are lifted.

“Major towns with populations of approximately 30,000 like Portlaoise and other major towns like Roscrea and Nenagh must have a national bus service.

He said that he has since contacted the Minister for Transport Eamon Ryan saying it is Government policy to promote public transport and that “the idea that everybody should get off buses and drive to Dublin every day for work or do their business is not the way forward.

“The Minister must contact Bus Éireann and get a commitment that this service will be fully restored when it is safe to do so from a public health point of view.”