Abbeyleix goes green with its own TV show 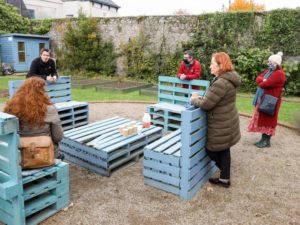 ABBEYLEIX is about to have its own TV show, exploring the beauty and vital importance of climate action and biodiversity.

The show is part of the Abbeyleix Climate Action Project, which was launched by ecologist and broadcaster Duncan Stewart late last year. It will continue every Saturday for five weeks until 6 March inclusive, starting at 11am.

In the first episode tomorrow, they will cover a range of interests including gardening, saving money on home energy, building nests for the Dipper bird and the recently installed sensors that monitor traffic and air purity.

People can join the conversation live and put questions to the panel on Facebook or in advance of the show. No registration is required at Facebook.com/Abbeyleix.

Niamh and the Tidy Towns team will be joined for the first episode of Abbeyleix Almanac TV by Brian Maher of Heritage Ireland, who will explore the origins of the Abbeyleix fountains.

Ricky Whelan of Birdwatch Ireland will also feature in the first episode, as he explains why starling murmurations occur and what other wildlife can be seen in the locality this month.

The Abbeyleix Climate Action Project is focused on everyday practical climate action work, driven by the community’s grassroots. The aim is to build a sustainable future, with local people at the heart of change.