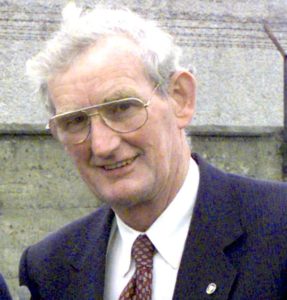 THE news on Friday morning of the sudden death of Larry Mahoney of Durrow caused a great sadness throughout the entire county.

Larry was a member of a famous Cullohill family and if someone were to ask him what was his club he would have to ponder. Okay, the green and red brought him his greatest honours and he was an integral part of the great team that won the Intermediate championship in 1954 and 12 months later the O’Keefe Cup made its way through the town of Durrow in the same parish.

Durrow always had its share of very skilful hurlers but could not match the more teak tough men from Bunlacken. Then there was a third club in the area called Cannonswood who reached two junior finals but could not get over the hump, although they too had a nice mixture of teak toughness and skill.

When they eventually surrendered there was a bidding war from the other two clubs and Cullohill were to benefit. Larry kept a close watch but his playing days were reaching the end line. Then in Centenary year came another amalgamation called the Harps. Although Larry was sad to see the end of Cullohill he would have said ‘if it’s for the betterment of hurling then so be it’.

After the success of ’54 and ’55, Cullohill took a back seat but only after Christy O’Brien and company snatched the cup again in ‘56.

In ‘64 Cullohill bounced back to reach the third senior final but a new force had arrived in the form of Camross, and they were the reigning champions. At the same time the Bishop of Ossory had sent a new curate to the Mountains, Fr Lar Dunphy, a native of Cullohill, but even more serious a first cousin of Larry and his brothers.

Here was a predicament for all concerned and while there was tension on the week leading to the final the new curate assured all concerned there was no need to get excited. After all the champions had never retained the title but neither had Cullohill.

A record attendance enjoyed a thriller and sporting contest where Larry wore number three and there were five Mahoneys on the team. Camross paraded five Cuddys and it looked like being a draw but Cullohill sneaked a late point. Then controversy as the champions went in search of the equaliser. A Camross player shot for a point but as the ball was en-route the full time whistle sounded. The cup was making its second visit to Cullohill Mountains.

Strange as it may seem, that was to be the last visit of the famous trophy but the sides met again 12 months later and Camross reversed the result in what was to be Larry’s last senior final.

Larry hurled with Laois winning two National League medals in 1959 captained by Dan Culleton and beating Roscommon. Then in 1964/65 they beat Kerry captained by Paddy Mahoney. Larry was chosen to play with the Rest of Leinster in that era beating off strong opposition from Wexford, Dublin and Kilkenny.

In retirement Larry was involved in golf and in particular played a huge part in the organisation of Laois Hurlers’ golf outings. Larry loved golf and was highly regarded in organising events in a very fair manner. Another great pastime was his participation in bridge of a Sunday night.

Larry worked in Moynan’s Hardware in Abbeyleix for years and later took over the running of the Post Office in Durrow until his retirement some years back. Tragedy struck the family when his daughter was killed in a freak storm in England.

Larry seldom missed an All-Ireland hurling final and always had a mark for a ticket.

After he retired Larry became a carer for his wife, Nancy but sadly last week both of them got seriously ill and Larry was moved to Portlaoise Hospital where he passed away on Thursday night. That was hours after his first cousin Philomena was laid to rest in Durrow Cemetery.

On Sunday morning Larry’s Requiem Mass was celebrated in the Church of the Holy Trinity, Durrow where he and Nancy seldom missed Sunday Mass. Later Larry was laid to rest in the adjoining cemetery.