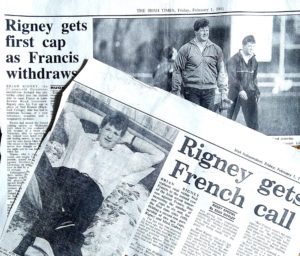 NEXT Sunday Ireland take on France hoping to get their Six Nations campaign back on track and for one Portlaoise man it is sure to rekindle some memories. As I look forward to that game I cannot but reflect back the corresponding game 30 years ago.

In a previous life I managed a bookmaker’s office in Thurles for a brief period in early 1991. Ireland’s first home game that year was against the French on Saturday 2 February for which I had a ticket.

However, having only taken up the position in Thurles in January I thought I might be pushing it a bit to look for a Saturday off for the rugby. So instead of heading up to Lansdowne Road I passed on my ticket to a friend in Portlaoise Rugby Club.

We must remember that back in 1991 the likes of the internet, mobile phones, iPads were unheard of, indeed if someone had suggested how technology was going to progress over the next couple of decades the men in white coats would have been called for.

Instead in the ‘90s for our up to date news etc we depended on the teletext – Aertel on RTE and Ceefax on BBC. And so it was that the first thing I did each morning in Thurles was to switch on the television and scroll down Ceefax to see what was happening.

You can imagine my disappointment, and then frustration, when up popped the news that Brian Rigney would be starting for his Ireland debut on Saturday again the French because Neil Francis had to cry off due to illness. Brian joined Mick Galwey in what was a distinctive pairing in that both were making their Ireland debuts.

Laois had not had a senior international since Gerry Culliton had donned the green jersey back from 1959 to ‘64. Now here we had another and I would not be in Lansdowne Road to savour it.

My disappointment was all the worse because, and I doubt that Brian will even remember this, but I was one of the first to put an arm around the 19-year-old Brian in the second row after he had been introduced to the game by Denis Aldritt in Portlaoise RFC. Brian was starting out on his illustrious career while I as nearing the end of my not so illustrious career.

But that long introduction is by way of looking back at Brian’s time in an Irish jersey which was cruelly cut short as a result of a serious knee injury suffered while on tour in Namibia in July 1991. He eventually called time on his international career following Ireland’s tour to New Zealand the following year.

Brian had been on the fringes of the international scene for a number of years. He had played for Ireland ‘B’ on a number of occasions and in the summer of 1989 toured Canada and the United States with Ireland. He played in both tests on that tour, but caps were not awarded. 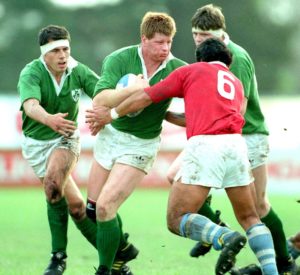 Brian Rigney goes on a burst against Poverty Bay during Ireland’s tour of New Zealand in 1992 Photo: ©INPHO / Billy Stickland

Brian is one of seven brothers all of whom have excelled on the sporting field, as they say ‘one was better than the next’. Initially the Rigney household would have been a GAA household but gradually nearly all the lads turned to the oval ball.

Brian would be the first to admit that he didn’t exactly excel at hurling or football which were his games in his teens. He decided to give rugby a shot and from the word go he took to it like the proverbial duck to water.

He quickly progressed through the ranks in Portlaoise and caught the eye of some outside the club. This resulted in him moving to Highfield in Cork, and then onto Bective Rangers in Dublin. However, it was his move to Greystones that he began to make a real name for himself in the senior ranks.

Having partnered Galwey against Scotland, the pair again scrummed down against Wales in Cardiff. When Neil Francis returned from injury in time for Ireland’s home game against England Brian got the nod ahead of Galwey. That partnership was retained for the away game against Scotland.

Having been selected for all the games in the 1991 Five Nations championship Brian most probably was looking ahead to the World Cup which was to be played in Ireland and the UK.

But fate can be cruel and on a summer tour to Namibia Brian’s dreams were shattered. Once again partnering Neil Francis in the opening game of the tour, Brian suffered a serious knee injury meaning he had to fly home the following day.

With his World Cup dreams in tatters Brian dug deep to rehab his knee and to get back playing at the highest of levels. Things seemed to be going his way when he was selected for Ireland’s game against the French in March 1992. He subsequently went on Ireland’s 1992 tour of New Zealand coming on as a replacement in the first game and being selected for the second, but as a flanker.

But deep down Brian knew all was not well. At the time he said: “If I played a match I couldn’t train and if I trained I couldn’t play.”

Brian went on to have surgery on his knee and while conceding that his international career at an end, he id not want to hang up his boots, feeling he still had plenty to offer.

He decided to throw in his lot with Shannon in Limerick and that was to prove a very fortuitous move. He went on to win two All Ireland League medals with what many Irish rugby aficionados consider to be the best Irish club team of all time.

From there he move to Connacht where he played for a few seasons with Buccaneers. This was a particularly happy period of Brian’s career as he got to tog out alongside his brothers Donal, Des and Colm. Almost unbelievably Buccaneers reached an AIL semi-final only to be beaten Cork Con.

During this period Buccs were trained by none other than Eddie O’Sullivan and on his departure Brian replaced him as coach. After two seasons at the helm Brian stepped down.

It was time for Brian to step back from the game he had graced on the field of play and relax and just watch on.