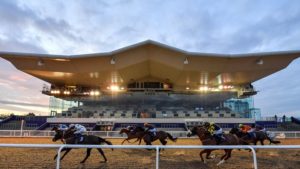 Ridden by Colin Keane, the 6/4 favourite, was held up towards the rear in the 5f maiden before beginning his move two furlongs out and led early in the final furlong to go on and win.

Joseph O’Brien’s Tassel Flower came second at odds of 25/1 while the 7/4 second favourite Blue Cabochon trained by Fozzy Stack and ridden by Chris Hayes was third.