Row over on-street parking in Abbeyleix

‘I am now left with the dilemma that if I park past the double yellow lines, I am obstructing my neighbours exit. If I park outside my home, I am breaking the law. If family or friends call around, they have nowhere to park. The renovations on my home can no longer happen because the builders have nowhere to legally park’ – Richard O’Brien. 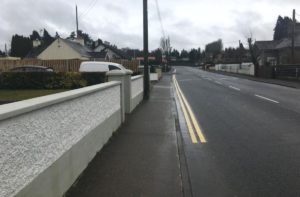 The double yellow lines outside the O’Brien household along the Rathmoyle Road in Abbeyleix.

A Portlaoise couple who bought a cottage in Abbeyleix two years ago came home from work last summer to find they were prohibited from parking outside their own door. What they thought was going to be their dream home for themselves and their two children has now turned into a nightmare.

Richard O’Brien and his wife, who bought the single-storey cottage at Rathmoyle Road, Abbeyleix in February 2019, say the property came with on-street parking.

Taking up the story, Mr O’Brien said “Everything seemed fine in the beginning. We had been parking outside the property just like other people on the road for well over a year. 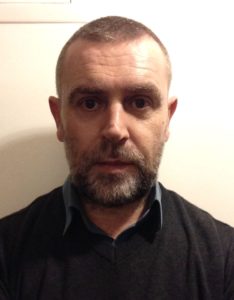 Richard O’Brien says that his family feel they have been let down by councillors in the Portlaoise area and council staff because his family can no longer park outside their own home in Abbeyleix.

One morning, we found notices on the windows of both our vehicles written with red marker telling us to remove our vehicles from the kerb and that the gardaí have been notified.

“While I wasn’t happy to have an anonymous note on my windscreen, I did comply and parked fully on the road. All of the other vehicles on the road are either parked or half parked on the footpath. I thought it strange that only our vehicle was causing a problem.”

Mr O’Brien said: “Later on in 2020, on 27 June, a garda knocked on our door and asked me to remove my vehicle, which was parked outside our house. I was really surprised that we were being asked to move the vehicle when we were clearly breaking no law. I wasn’t parked on the footpath.

There were no road markings outside our house and no signs to indicate otherwise.

“The road we live on is wide and straight. It is 27 feet wide from kerb to kerb. I continued to park the vehicle on the road as I felt we were breaking no law. “Four months later, on 14 October, another knock came to the door. The garda asked me to remove my vehicle from the road again. I pointed out that we were parked legally on the road.

The garda said that he was responding to a complaint by someone, but told me he didn’t know the name of the person, that the complaint was coming from garda headquarters in Portlaoise.

“The garda said my vehicle was an obstruction to the vehicles exiting the junction up the road, which is 50 metres away. “We subsequently found out that under the Road Safety Authority’s Rules of the Road that it is illegal to park within 15 metres of an approach to a junction. I explained to the garda that we were well outside the parameters of any obstruction. However, despite me trying to explain, the garda told me that if I didn’t remove the vehicle he was going to have it towed away. When I pointed to the other vehicles that were parked on the footpath along the road, I was told it was at the gardaí’s discretion. “Some time after this, Laois County Council staff appeared on the road taking measurements. I recognised one of them and approached him. I asked him what was happening.

He explained that he was carrying out a traffic report over a complaint about parking within the stretch of road outside my house.

I pointed to where my house was and the council staff member said I would not be affected by the measures for road markings as I was too far away to be an obstruction. “On Monday evening, 7 December, when I returned home from work, there were double yellow lines painted from the junction down to my house, 50 metres away. I had received no consultation from any local representatives or anyone from Laois County Council. There was no notice placed on either the council’s website or in the local press advising of the work or seeking submissions from the public on the matter, as would normally be the case when the council intend to carry out such work. 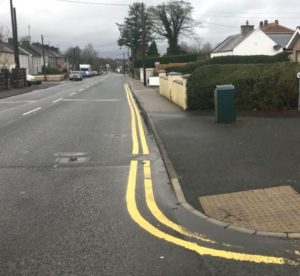 The homeowner came home from work one evening to discover the council has laid double yellow lines outside on the road of his house preventing him from parking outside his own home.

“I am now left with the dilemma that if I park past the double yellow lines, I am obstructing my neighbours exit. If I park outside my home, I am breaking the law. If family or friends call around, they have nowhere to park. The renovations on my home can no longer happen because the builders have nowhere to legally park.

“I contacted Laois County Council and explained I was assured that the traffic report made it clear that I would not be affected by the new road markings and that I would like the double yellow lines removed as soon as possible. I explained that I had no prior contact from Laois County Council regarding these huge changes to the road outside my house and received no advance notice.

I received an email response about my query.

“It read that a road safety issue in respect of the junction of the R-430 Ballinakill Road and the L-67203-0 Rathmoyle Road in Abbeyleix was raised in a notice of motion tabled at the October meeting of the Portlaoise Municipal District.”

At that meeting, cllr Willie Aird proposed the following motion: ‘That the Portlaoise Municipal District meeting calls on Laois County Council to make safe the junction from Rathmoyle Road to the Carlow Road in Abbeyleix.’ The motion was seconded by cllr Catherine Fitzgerald with no dissension from other councillors.

Mr O’Brien said: “I contacted cllr Aird, who raised the matter at the meeting. I explained the situation to him and asked him if he could please re-evaluate the situation. I contacted another county councillor, who arranged to have a council engineer meet and discuss the double yellow lines. I was hoping for a compromise by stating my case, but it came to no avail. The engineer refused to remove any of the markings.

I have also found out that in order to impose double yellow lines, the junction needed to be declared dangerous.

“What I would like to know is how the junction can be declared dangerous if there is no history of any accidents on that stretch of road? Who declares it dangerous? “What is also so puzzling is that within six weeks of the motion being discussed at the meeting, the council could come out and do the work, when in other instances it takes them years to carry out similar roadworks in other areas around Laois.”

Mr O’Brien said: “We do not feel welcome here now and feel let down by council members and staff of Laois County Council, who made this happen.

“I’d like to know from the council why they put double yellow lines from the junction to my home. What was the outcome of the road traffic report carried out by the council employee at the time? I’d also like to know is that stretch of roadway considered an accident black spot and, if so, how many accidents have been recorded in that area in the past ten years? “And finally,” said Mr O’Brien, “is it council policy to lay double yellow lines outside residences, thus preventing homeowners from parking outside their own homes?”

The measures introduced also have the support of An Garda Síochána, in line with their concerns regarding road safety at this location.

Replying to Mr O’Brien’s questions, senior engineer at the Portlaoise Municipal District roads office Wes Wilkinson said: “The introduction of the road markings at this location are a follow-on from a notice of motion agreed by elected members (councillors) at the October 2020 Portlaoise Municipal District committee meeting. “Subsequent to the notice of motion being agreed, there were various inspections on site to advise the introduction of the road markings. “The measures introduced also have the support of An Garda Síochána, in line with their concerns regarding road safety at this location.

“Taking all of that into account, the measures are introduced by Laois County Council as a road safety intervention and are in line with the provisions of road traffic regulations insofar as they empower local authorities to regulate the use of the road network in the overall public interest.”