‘Maybe, there’s no truth in it. But if there is, we should call a special meeting of Laois County Council’ – Cllr Willie Aird 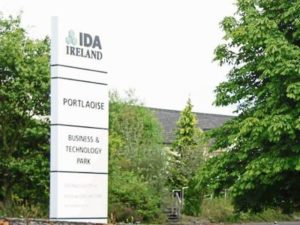 THE IDA has dismissed any suggestion that it has sold it’s 44.5 acres of land or any of its premises at the Portlaoise Business and Technology Park in Portlaoise to a private company.

During the course of this mornings monthly meeting of Laois County Council cllr Willie Aird asked the chief executive John Mulholland was he aware of the IDA selling the park, which is located along the Mountrath Road, to a private company?

“I’ve no idea what that question is about,” replied Mr Mulholland.

Cllr Aird said that he had been speaking with a person from the Laois/Offaly Education Training Board who were looking to take a premises in the business park and who was informed that the park had been sold to a private company.

Cllr Aird said that the last time he had contact with the IDA was when a local company – Internal Solutions – has sought premises in the business park.

Cllr Aird said: “They (IDA) insisted that they didn’t want them (Internal Solutions) in there, that they wanted manufacturing businesses. But we eventually got them to agree to back down. Glanbia are now in there while their cheese factory is getting built in Togher.”

“Now, I’m told that the park is sold to a private company,” said cllr Aird. “If that is the case I would have assumed that the chief executive would have known. Laois County Council bought that land from Dunne’s. The IDA were in the Clonminam Industrial Estate at the time and they asked for a swap of land and we agreed to it.”

Cllr Aird said: “The Cathaoirleach (cllr Catherine Fitzgerald) wasn’t aware of the situation either when I asked her could I raise it at the meeting. Maybe, there’s no truth in it. But if there is, we should call a special meeting of Laois County Council.”

Mr Mulholland said: “I had no notice or idea that this issue was coming up for discussion. If I did know I might have been in a position to help.”

“I hope it is not true, said cllr Aird. “Can I ask the chief executive to try and find out because he’s in a position to do so?”

“I’m been put on the back foot here. I will pursue it and see what the issue is,” said Mr Mulholland.

Following enquiries from the Laois Nationalist an IDA spokesperson said: “Neither IDA Business and Technology Park Portlaoise nor any building within has been sold by IDA Ireland.”