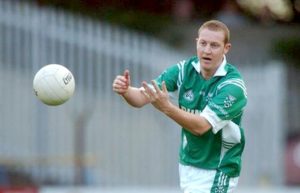 A FORMER Stradbally and Laois footballer has been appointed selector/trainer of Aughrim’s St Patrick’s GAA club. Darragh McEvoy has taken on the role prior to the recommencement of GAA activity whenever that might happen.

Aughrim had a disappointing championship campaign in 2020 and have attracted the services of McEvoy to boost the management team.

In a statement the club said: “Aughrim GAA Club would like to formally announce Darragh McEvoy as trainer/selector for the coming year. Darragh, who originally hails from Stradbally in Laois, won a SFC in 2005 and played all underage grades with Laois which culminated with the Seniors in 2002 but his work as a garda brought him to Wicklow where he then won a SFC with St Pat’s in 2012. In 2016, when he returned to Stradbally, he won his second SFC.

“Darragh has been involved with the underage teams in St Pat’s over the past few years so he brings a lot of experience with him from his own playing days and hopefully this can help with the development of our own young team.

“When we eventually get back out on the pitch, we believe Darragh will be a massive addition to our plans for the year. The club would like to wish Darragh and the lads all the best for the year ahead.”