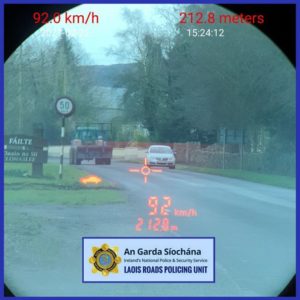 The car that was seized by gardaí in Clonaslee today

A DRIVER caught speeding through a Laois village today was arrested after giving a false name to gardaí.

The Laois Roads Policing Unit was on patrol in Clonaslee when they stopped a motorist   travelling at 92kph in the 50kph zone.

The driver gave a false name but was subsequently identified. A check on the Garda Mobility App revealed that the culprit was disqualified from driving.

The driver was arrested and has been charged to appear before Portlaoise District Court on a series of traffic charges. The car was seized at the scene.