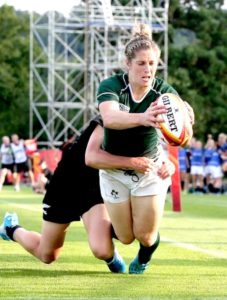 CERTAINLY it will come as no surprise to those of us who live in Laois to learn that Alison Miller has been named on an Ireland Rugby team of the decade following a public vote.

The vote was run by The Front Row Union publication and Miller was voted in on the wing on a team of players from 2010 to 2020 after receiving 1,197 votes.

The vote is proof positive, as if that was needed, that Miller was one of the most exciting players to grace rugby pitches over the past decade. She retired in 2019 after gaining 47 caps and winning two Six Nations titles and a Grand Slam.

She also featured in Ireland’s games that saw the country advance to the semi-finals of the 2014 World Cup. Who will ever forget her remarkable try in the defeat of New Zealand?

Miller, along with Irish players Niamh Briggs and Claire Molly each received 75% or more of their positional votes. As a result the organisers have put the three of these players forward for a separate vote for the ‘Player of the Decade’.

According to the organisers: “With over 11,000 readers participating to cast over 21,000 votes, it has to be a poll worthy of note. The votes came from 75 different countries and over 500 different towns and cities.

“With regards to spreading the word, it was good to see so many community groups, who wouldn’t normally be visiting our pages, swing their votes behind one of their local players and hopefully that has helped raised the profile of a few players in their local areas.