Councillors clash over quarries in Laois

‘Quarrying is a visual intrusion on our countryside, it damages landscapes, damages our cave systems, it causes a deterioration in water quality, loss of land, increases traffic in the area and in most cases the road network going to and from the quarry are not suffice for the heavy traffic using them’ – Cllr Aisling Moran (FG) 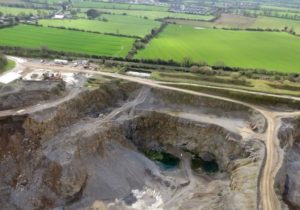 All quarries in Laois are operating legally and operate under licences granted to them by the Environmental Protection Agency (EPA).

That’s according to councillors and council officials who were discussing a motion by cllr Aisling Moran at the February monthly meeting of Laois County Council.

Cllr Moran called on the council to “consider using renewable and recyclable materials for buildings and roads instead of the opening of quarries and destroying our countryside.”

Replying to the motion Director of Services at the council Simon Walton said: “Laois County Council operates under the guidance of a Corporate Procurement Plan which requires the council, in undertaking roads activities directly or in tendering for the undertaking of such activities, to pursue sustainable solutions such as the use of recycled asphalt when resurfacing roads.

“Recycling planed-out materials often forms part of the roadworks methodologies utilised reducing reliance on quarries and providing for the circular economy. Green procurement and the awarding of contracts to reflect a bias towards greater sustainability is increasingly an obligation for procuring authorities and Laois County Council continues to integrate those sustainability principles into various methods of operation and of procurement.”

Cllr Moran said the EU has set a target of 70% of construction waste to be recycled but that at present Ireland recycles 5%. She also said that from 1,500 extractive industries in Ireland, 600 are quarries.

“During the Celtic Tiger era, Ireland was producing over 130 million tonnes of sand and gravel per year, which was roughly 30 tonnes per person living in the republic. It was four times more than the European average. Even during the collapse of the construction industry we were producing nearly 10 tonnes per head of population. I know we need the materials for building and roads, but it’s not sustainable, and the fact that we export so much, €134million in precast concrete alone in 2017.”

She said: “We are digging up our beautiful countryside so that we can export millions of euros worth of aggregates to other countries, so that they can keep their countryside intact. We need to look at other ways of getting aggregates for the road and construction industries instead of quarrying and mining.

“Quarrying is a visual intrusion on our countryside, it damages landscapes, damages our cave systems, it causes a deterioration in water quality, loss of land, increases traffic in the area and in most cases the road network going to and from the quarry are not suffice for the heavy traffic using them. There is noise pollution, dust, smoke. House prices in the area decrease. And then when they are finished quarrying and have made their fortune, we are left with an eyesore, gaping holes in our countryside that can fill up with water, forming dangerous quarry lakes, or they are turned into landfills. Destroying the once beautiful countryside that we had. What I am proposing is that we look at countries like the Netherlands, where they are using 100% recyclable materials for civil and road projects.”

Cllr Moran said: “If we were to dredge the rivers, this sediment removal process can be used to gather sand, gravel and other debris that can be used in the construction and road industries. Dredging has many many benefits. It removes dead vegetation and other debris. It keeps the water clean and preserves the local wildlife ecosystems. It stops the excess growth of plant life which can cause oxygen deprivation. Dredging reverses the effects of soil erosion, keeping the local ecosystem and its native plant and aquatic wildlife intact. It reduces the risk of flooding and eliminates the extra costs on the government and local authorities that flooding does create.

Not so according to cllr Paddy Bracken who said: “I’ve never heard such rubbish in my life. Where will we get the material we need to build our houses in the future? We can’t cut turf shortly. We won’t be able to cut timber and now by your yardstick we won’t be able to export concrete.”

He asked: “Is there an agenda here? Are there any quarries applying to start up in your area? All quarries in Laois are operating legally. I’m not supporting this motion. Its nonsense.”

Replying cllr Moran said: “So what you’re saying is that we stay on going as we are? Stay digging up the countryside?

Mr Walton said: “We are reliant on local quarries to deliver the materials we need from licensed quarries that have EPA licences.”

Cllr John Joe Fennelly said: “We have a lot of legislation around quarries that work under strict guidelines and regulations.”

Cllr Moran said: “The EU said we have to be using 70% recycling material which we are not. We can get to 50% by dredging the rivers for sand and silt.”

“Cllr Moran is off her tree,” said Cllr Bracken.

Having the final say on the matter, for now, cllr Moran said: “If it keeps going the way it is there will be holes all over the countryside.”