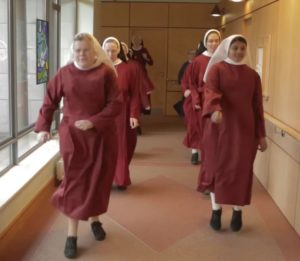 An enclosed order of nuns in Dublin have become the latest group to take on the dance challenge.

The Redemptoristine Nuns who range in age from 28 to 92 can be seen dancing in the halls, rooms and grounds of the monastery of St Alphonsus in Drumcondra.

The 13 sisters began practising the viral dance last week and uploaded the video to their social media channel where it has already been viewed over 15,000 times.

The Sisters said that they made their video to cheer people up and their way of offering a prayer for those suffering due to Covid-19.

The order’s source of income comes through the production of altar bread. However, with teh curtailment of the masses under Level 5 restrictions demand for the altar bread has declined. So now instead the sisters have begun knitting, candle making and producing cards to supplement their income.

The Redemptoristine Nuns have been in Dublin since 1859. The enclosed order limits their interactions with the outside world and devotes their lives to prayer.