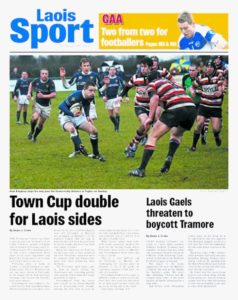 THE Provincial Towns Cup holds a special place in the hearts of all rugby followers outside of Dublin and Portlaoise and Portarlington got off to winning ways in the 2011 competition.

Portlaoise were at home in Togher to fellow Division 1b side, Enniscorthy. Portarlington also looked to the south east for their opposition when Wexford Wanderers travelled to Lea Road.

In the end it was two from two for the Laois clubs as they turned on the style. Portlaoise’s forwards were in rampant form and Enniscorthy must have been wondering what hit them. Portarlington from the outset were totally on top with David Murphy in devastating form scoring two tries and converting three conversions and a penalty. 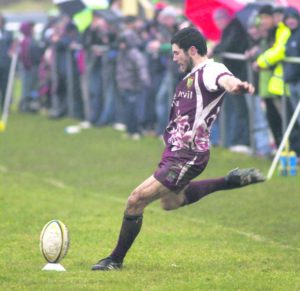 In the 2nds Provincial Towns Cup Portlaoise had to use all their guile and experience to see off the challenge of Balbriggan. This Portlaoise side had already captured their league title but for periods here they were not at their best but when it counted they got their act together and run out 20-11 winners. 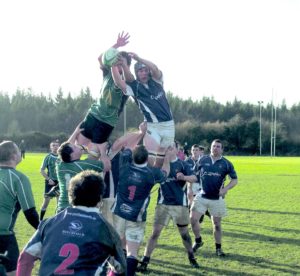 Meanwhile, despite being reduced to playing with just 14 men for over half an hour against Antrim in O’Moore Park, Laois showed a tremendous fighting spirit to weather the Ulstermen’s second half storm and claim a vital two National Football League points. The victory left Justin McNulty’s charges top of Division 2 along with Derry. 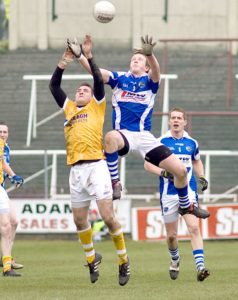 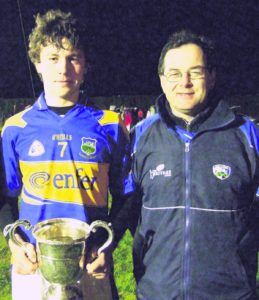 Ballinakill teenager Cha Dwyer stepped up to the plate to secure a place in another Leinster colleges hurling final for Castlecomer CS with the defeat of North Dublin Schools in the Leinster College’s SH ‘A’.

Knockbeg College emerged as Laois’ most successful school in the Leinster cross country championships in Santry. It was truly a remarkable achievement for the school because just seven years ago they only managed to have one athlete qualify for the provincial championships, while in 2011 they had teams competing at every age group. It is testament to the tremendous dedication which has been shown by John Maye and John Behan who have completely transformed the school into a real force in athletics. 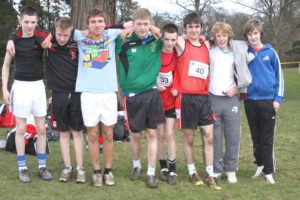 Going into the final games of the divided Seniors division, Killeshin’s 2-3 victory over champions Wolfhill opened up the title among the top five teams.

Crettyard qualified for a Leinster Senior Cup clash with League of Ireland side Shelbourne following their 3-1 win over Kilkenny side Evergreen. 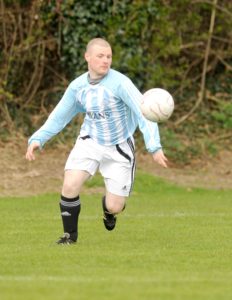 Cillian Doyle was in fine form for Portlaoise Celtic in their pre-season friendly against Suncroft Photo: Adrian Melia

Following Crettyard’s first string winning earlier, the second string were slow to get out of the blocks against near neighbours Wolfhill Athletic in the Nationalist Division in the game that ended 2-2.

Portlaoise Celtic played their first pre-season game of the 2011 season at home to Suncroft in a game that was played in good conditions and the game was played in a good spirit. The home side lost 1-2 but were happy with their performance.

Killeshin were comfortable 0-3 winners in this Med Bar Cup tie despite being wasteful in front of goal.