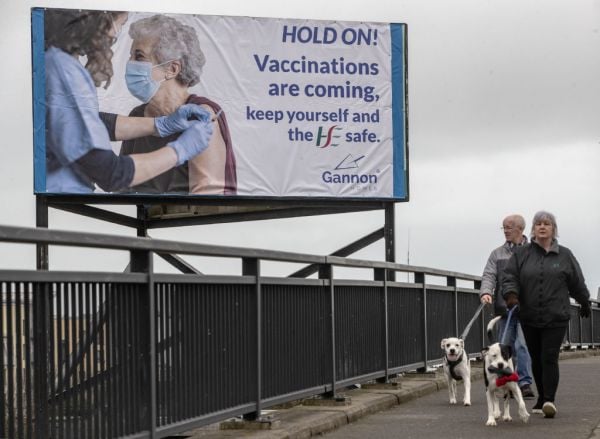 There is set to be an issue with different levels of vaccination across Ireland, Northern Ireland’s First Minister has said.

Arlene Foster said she believes UK Prime Minister Boris Johnson should have a conversation with Irish premier Micheál Martin about the possibility of surplus vaccines being given to the Republic.

Mrs Foster said it is her desire that everyone on the island is vaccinated as quickly as possible.

She blamed the “inflexibility of the EU” for the differential.

Mrs Foster said 40 per cent of the population in Northern Ireland have had their first dose of the jab and said she is alarmed by the figures in the Republic.

“There will have to be conversations about how we move forward in this,” she told RTÉ Radio’s This Week programme.

“Obviously we will be taking advice from our chief medical officer (Dr Michael McBride) as to what are the best ways forward, but it is my desire of course, as a neighbour, to see everyone vaccinated on the island of Ireland and I very hope much that the vaccine programme in the Republic does pick up pace because it’s important that if people are coming and travelling across the border that they are vaccinated, but also for the population of the Republic as well.”

Mrs Foster said Dr McBride has made it clear that if a lot of people are coming to Northern Ireland who are not vaccinated it “could have an impact on the efficacy” of the vaccine on those who have received it.

She said that so far Stormont has advised people to be sensible rather than issue a ban on crossing the border.

“That’s something we haven’t done unlike the Republic, we have never had that rule, we have tried to say to people to be sensible and not move between different jurisdictions during the different lockdowns,” she said.

“But I think we want to take advice from our medical experts on all of these issues.”

By Saturday, half a million doses of the jab had been administered in the Republic.

Next week, vaccinations are set to start for those with underlying health conditions as well as continuing the rollout for the over-70s and healthcare workers.