Four areas must be prioritised to redress imbalance within the game

Michael Dempsey has had a long involvement with Gaelic games. Along with his siblings, from Milltown in Laois, he won the Dermot Earley family award in this year’s Presidential Awards.

As a player he won a National Football League medal with Laois in 1986 and in the 1990s managed the county.

Having moved to Kilkenny he became involved with hurling teams and his expertise in physical preparation brought him to the attention of Brian Cody.

For 15 years he was involved in 11 senior All-Ireland finals and the winning of eight.

Chair of the Talent Academy and Player Development Review Committee, which reported in 2019, he is also GAA programme director in IT Carlow. 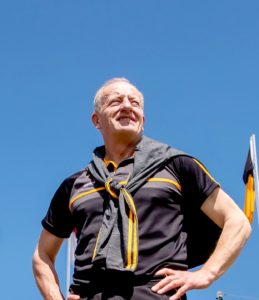 WITH the benefits of the recently adopted split season not due to take full effect for another year, it is important that we don’t lose sight of the lessons of the past 12 months.

Advocating a better balance between club and county can leave me open to the charge of inconsistency. I spent so long involved with one of the leading county teams, Kilkenny’s hurlers, and the intercounty bubble makes two basic demands: your full attention and successful outcomes.

I can absolutely reconcile that. I started off as a club player before playing intercounty for a good few years with Laois but remained involved with my club St Joseph’s and Laois under-21s and seniors.

I became involved with Kilkenny almost by accident because I came to live down here 19 years ago.

Sometimes I do reflect that I could have left that involvement earlier but while I loved the process and it was brilliant to win – and I wouldn’t have been there so long if we weren’t winning – it was always clear to me that the elite level of intercounty Gaelic games is not the heartbeat of the real GAA.

When we have recovered from the current Covid crisis, we shouldn’t forget the lessons of 2020.

In unforeseen circumstances club players got a break at a time when the void between club and county was actually getting bigger. It’s amazing how beneficial it was for players.

They had more time for recovery, for training – they were able to train in the middle of the day instead of late at night – and they didn’t have to travel as much. They were connected more with their club team-mates in their local communities where they were introduced to Gaelic games and supported to thrive as players.

Players had a smile on their faces because there was a greater balance in their lives but at the end of the day the outcomes were as good as other years and possibly better in terms of conditioning because of greater recovery and less pressure on their time.

I believe in light of all this that there are four areas, which should be prioritised to redress the imbalance that has developed within the GAA.

Returning players to the club

I have often discussed why we should reconnect county players with their clubs as much as possible, including doing some of their training there.

It points a way forward that could be ground-breaking for the GAA in terms of physical preparation going forward, most especially in terms of player welfare – the ability to prepare in the club setting and supported by the county’s lead S+C person should not be discounted. I think there’s another advantage in that clubs would be benefiting from the professional advice.

In the review that we did (Talent Academy and Player Development Review Committee Report, 2019), we placed the club at the centre of the player pathway.

The feedback we had got from consultation with clubs all over the country was that the intercounty game was becoming more and more professional with increasing demands and farther distant from what the GAA is about, which is community, sense of place, volunteers and the centrality of the club.

Central to our report was that development structures should be primarily preparing footballers and hurlers for clubs – and only after that, for county teams – and prioritising their retention as active players.

There has been a code of conduct in place for nearly 10 years now, intended to ensure that managers of county teams share the values of the county board. Despite that, intercounty has continued to be in danger of becoming a runaway train within the association.

My second point is that there is a huge need for intercounty managers, who are a very powerful and influential group, to be more integrated into what the GAA is actually about in terms of values and the importance of the club.

Obviously the importance of the intercounty scene is huge in terms of revenue but more importantly in the creation of role models for kids – in terms of their intrinsic motivation and participation.

That said, it is overwhelmingly their sense of place and that connection to club, family and community that inspires intercounty players.

We also need to look at what the GAA means to our overseas members and evaluate our success in helping them to stay connected and remain part of our culture.

There is a need for managers to be brought more into the system so that their opinions can be canvassed on how to reduce the stress on our elite players.

If we are to continue in the direction that we’ve been going, how sustainable is it considering we’re an amateur organisation, overwhelmingly made up of volunteers? Or for our intercounty players to be giving that level of commitment, which intensifies every year?

We need to consult with managers, to educate them about our priorities. I think the majority of managers are very sensible, although we appreciate the pressure on them in what is a results-based activity.

Sometimes, in my opinion, the problem is the extent to which managers want total control over the lives of players. This problem in turn creates further issues in terms of creating an imbalance in the bigger picture of player welfare and is very much at odds with the ethos of the GAA.

Youth development, key to the future

Uachtarán John Horan had the foresight to set up a player pathway review committee to address concerns around Talent Academies in the GAA and how best to improve the environment for all our young players.

An important aspect of this review was consultation with all key stakeholders. Concerns about academies and winning at all costs are well-founded. Placing young players on a pedestal at an early age can result in missing developmental opportunities and drop-out.

Early underage success is not an accurate predictor of adult success and performance and winning only really matters at adult level. A long-term developmental approach is required when coaching our young players. This requires close collaboration between coaches dealing with the same player.

One underage dual player in our consultation said “my coach only cares about me when I play for his team”.

The ambition would be to develop young potential in a holistic manner – whatever the eventual level of participation and to encourage a lifelong association with the GAA.

There are new Gaelic games player pathways and new coach education frameworks based on international best practice in a GAA context.

These developments importantly and for the first time occurred in close collaboration between the GAA, LGFA and Camogie Association to ensure a common approach for our “family of games”.

The principles underpinning the pathway are consistent with GAA values, ie. “club is core”, “player centred”, “quality coaching opportunities”, “as many as possible for as long as possible”, “working together” and “inclusive”.

Creating the right coaching environment for our youth players and supporting our clubs will only strengthen the association going forward in a society where we cannot take the allegiance of our young players for granted.

The fourth point I would make and which was raised in our report is that there are so many silos in the GAA. We need to look at for instance the GPA, intercounty managers, the role of the club and its coaches, Croke Park, county boards and how all can achieve higher levels of co-operation in the interests of players and our games.

There are so many units within the GAA operating separately and whereas it has been one of our strengths in creating rivalry it’s also a weakness because everyone is looking after their own patch.

The pandemic gave us no option but to measure up and that changed the whole landscape. We had a blank piece of paper in terms of conceiving a fixtures’ calendar.

Another significant concern for the GAA is how we resource the weaker counties in terms of their preparation.

I know great work has been done in that respect but with less money, more pressure on sponsorship how do we ensure that players in those counties are helped with support systems to optimise their development and potential?

It will require better collaboration from all concerned to meet this and other challenges.