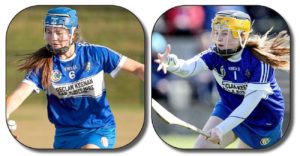 AFTER what has been a most unusual and topsy-turvey 12 months, particularly on the sporting front, there has been some bit of joy for two Laois camogie players.

At Friday night’s Camogie Association’s All Star awards Aedin Lowry (Camross) and Clodagh Tynan (St Brigid’s) were among the Soaring Sytar award recipients. Lowry was named as goalkeeper while one of the wing back slots went to Tynan.

Soaring Star awards are an acknowledgement of the great skill, talent, commitment and tremendous athleticism shown by players in the Junior and Intermediate grades.

Both girls were on the Laois team that made it to last year’s All-Ireland Intermediate semi-final where they ufortunately lost out to Antrim.

On their Facebook page, Laois Camogie paid tribute to the two players.

“Massive congratulations to Aedin Lowry and Clodagh Tynan on winning Soaring Star Awards. This is a fantastic achievement and we are super proud of them both. Laois Abu.”

Speaking at the event Camogie Association President Kathleen Woods said: “You, our nominees, played the Championships behind closed doors in empty stadia and it didn’t curtail you’re your passion and commitment. Congratulations to all of tonight’s nominees and winners. Let us now look forward to the 2021 Championships.”

All-Ireland Intermediate champions Down lead the awards with six nominees. Runners-up Antrim are represented by three players. The team is completed by Lowry, Tynan, two from Armagh and one player each from Cavan and Meath.