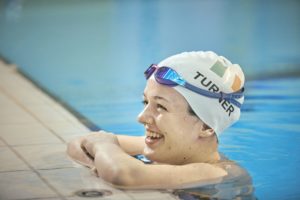 Paralympic swimmer, Nicole Turner, one of Paralympics Irelands ambassadors for their new fundraising campaign The Next Level Photo: Simon Burch

FOR a decade or so those in Laois swimming circles knew Nicole Turner was that bit special. But it wasn’t until the Rio Paralympics back in 2016 that Nicole bounced to national prominence when she was chosen to carry the Irish flag at the Games’ closing ceremonies. Not bad for a 16 year old.

Four and a bit years on, Nicole is now one of Ireland’s Paralympians who are heading up a campaign to raise funds for the rescheduled Tokyo Paralympics. Last year’s deferment of the games has added close on half-a-million euro to the budget for Paralympics Ireland to take a team to Tokyo.

Over the past couple of week’s Nicole has been extremely busy with her media duties appearing on the likes of the Late Late Show, Virgin Media’s Ireland AM and RTE’s Game On and then last Tuesday she carried out an on-line interview with a number of print media journalists. And on top of that she has to find time for training.

On that front, almost unbelievably, the Coronavirus restrictions have made life that little bit easier for Nicole, and her mother Bernie, although it’s not all easy going.

What has been better is the time of the day that Nicole’s training takes place, but for Bernie there is still the hours of driving and sitting around.

“The way training’s working at the minute is quite nice. In normal times, even though I represent Ireland, I train with my club and we train from 5-7 on every weekday (evenings) and on a Saturday we train at 7 o’clock in the morning and because I live an hour away I’d be up at twenty past five on a Saturday,” said Nicole.

“But now because of restrictions pools are only open a certain number of hours each day. So now it’s quite nice, I train 12 to half two most days so it’s bang in the middle of the day so I am not getting up too early,” she adds with a grin on her face.

However, for her mother the routine hasn’t changed all that much. The times for the trips may have changed but six days a week Bernie drives Nicole to the National Aquatic Centre in Abbotstown for her training sessions.

“My lovely Mam, it’s quite tough for her at the moment. Because we’re in strict lockdown, the pool is only open to athletes and coaches, so members of the public aren’t allowed in the pool.

“It is an hour and ten minutes up in the car (from Portarlington) so I train for 2½ hours and my Mam has the patience to sit in the car knitting or crocheting or go for a walk.

“She actually walks about 12km a day, the days are getting brighter and the weather can be nice. So when I go in for a swim, she goes and walks around the campus. She’s a super mum.”

And any of Bernie’s friends on Facebook can testify to this as she kept us all up to date with her walking exploits over the past weeks. Like so many, walking has been her saviour.

Despite all the turmoil, Nicole’s attention is still firmly focussed on Tokyo. She qualified for the Paralympics at the World Championships in 2019 but under Paralympic rules each country is allocated a set number of places which means her participation will only be confirmed later in the year.

At the Rio Paralympics, Nicole was Ireland’s youngest competitor. Medals may have eluded her but she qualified for five finals, set six personal best times out of her ten races while her best finish was fifth in the 50m butterfly.

This time around she is determined to do better and as such doesn’t even countenance the possibility that the games will not go ahead.

“Last year and this year was very strange for everyone. This year it is more positive for everyone as, thankfully, elite athletes are allowed to train properly. I’m training in the pool in Abbotstown six days a week. “Honestly, I’m taking it as if the Games are going ahead and I’m not letting anything get in the way.”

But even now that she is back in the pool training, looking back it has been a difficult 12 months, but in some ways it has been oddly beneficial.

“Previously the longest I had ever been out of a pool was three weeks. Obviously not every family has a pool in the back garden. During the first lockdown I trained out the back of our house where I have a little gym in a converted shed, and I went cycling six days a week.

“We didn’t get back swimming until the middle of June. Obviously, we didn’t know what I expect. I thought I would be absolute horrible in the pool. But it was no way near as bad as I thought. I’m obviously a much different swimmer now than I was ten months ago. The whole experience has made my stronger, and I feel I’m in a much better place.

“We had huge support from our support staff, psychological, anything we wanted. Obviously it was all (done) over Zoom but they really got behind us and supported us the whole way through lockdown.

“It opened a lot of doors for me, I got a lot of support from Sport Ireland and the Institute of Sport around education because I wasn’t in school.”

Nicole took a break from her Leaving Certificate studies in Coláiste Íosagáin to focus on the Tokyo Paralympics. Had everything gone to schedule she would have been back in school now preparing for her exams. But they didn’t.

She will in time return to her studies but when? Her mind is already set on Paris 2024.

“It did hit me last year when the Games were postponed, it was ‘Oh, I could have done another year in school’. Obviously education is important and swimming isn’t going to last forever and I’m in my youth now and I want to excel in my sport. So that’s why I decided to put a hold on my education and focus on swimming.

“I got a lot of support from Sport Ireland and the Institute around education because I wasn’t in school. It opened a lot of doors because I had a lot of free time to do other things. I’m just thinking ahead to Tokyo as I don’t want any regrets.”

And on her future – “I feel like I have been swimming for a lifetime. But to be honest I can’t even imagine my life without swimming. It is a huge commitment, but it is something I love and I can’t see anything stopping me soon from doing it.

At the best of times it takes a lot of money to a team to a major sporting event. Now with so many restrictions and conditions attached to the prevention of the spread of Coved 19 the financial demands are even greater.

“To go to a Paralympics or international competition, you’d (normally) have two or three people in a bedroom,” said Nicole.

“Now with social distancing, you can’t do that anymore. It is going to cost over €500,000 to send the Irish Paralympic team to Tokyo.”

“We’re asking our country to get behind us and donate as much or as little as they can. We want to achieve our best when representing Ireland. “But we are not just trying to raise funds for Tokyo but also for the Paris and LA Games so we can help future Paralympians as well.”

Titled the ‘Next Level’, the campaign also calls for equality of esteem, respect and admiration for para-athletes.

“People do get great satisfaction watching the Olympics and Paralympic Games and we’re just asking people to go to Paralympics.ie and donate – even a Euro.”