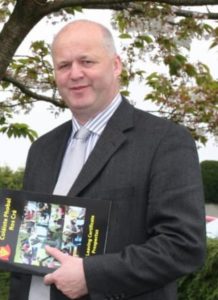 There was deep sadness in Portlaoise and Roscrea when the news spread of the death of Gerard O’Brien Kilminchy, Portlaoise on Friday February 26 February.

A native of Portlaoise, Mr O’Brien was the principal of Coláiste Phobal Ros Cré from its inception in 1999 following the amalgamation of the Vocational School, Sacred Heart Convent and the CBS until his retirement.

Mr O’Brien took his B.Sc at UCG in 1981 and H.Dip Ed. the following year. Prior to his appointment to Coláiste Phobal Ros Cré, he taught at Hacketstown VS 1982-1990 and then in Carlow VS. He was vice-principal of Portlaoise VS from 1996 until taking up his position in Roscrea.

In his youth he helped Portlaoise GAA to under-12 titles in 1971 and ‘72, under-14 football success in 1973 and under-16 in 1975. A gifted defender Ger went on to add minor in ‘76 and then two under-21 medals in 1978 and ‘79. Perhaps his finest hour was in 1992 when he lined out at full back for Portlaoise junior footballers against St Manman’s when winning the title comfortably.

“We are all extremely saddened to hear that our former Principal, colleague and friend Gerard O’Brien has passed away.

“We extend our sincere sympathies to his wife Mary, son Mark, extended family, relations, work colleagues and many friends.

Gerard was predeceased by his infant son James and is mourned by his wife Mary, son Mark and his partner Céire, his sister Elaine, brothers Pat, Matthew, and Frances, brothers-in-law, sisters-in-law, aunts, cousins, nephews, nieces, former colleagues in Cólaisté Phobal Roscrea, relatives and friends, and former sporting teammates in Portlaoise