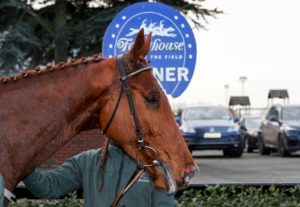 Bob Olinger is going to jump off favourite here and he’ll definitely stay. He’s won a Point to Point and beat Blue Lord around in the Grade I Lawlor’s Hotel Race in Naas very impressively. I know Henry (De Bromhead) thinks an awful lot of him. He was second to Ferny Hollow at the start of the year.

The best of the English is Paul Nicholas’ horse Bravemansgame. They’ve been very impressed with him all year and Paul is giving him as his Nap for the week which would bring your attention to it.

It’s probably a toss of a coin with the Irish will be going for Bob Olinger and the English for Bravemansgame but I think it will take a fair one to beat Henry’s horse. It will all depend on how the Novices run on Tuesday as to what way the prices are going to jump off in this one.

Monkfish is very hard to go by in this one. He’s a Gold Cup horse in the making and just makes everything look so easy. He was always going to be a better chaser than a hurdler and he is proving that. He was very impressive in Leopardstown last time.

The best of the English is Colin Tizzard’s The Big Breakaway but to me he has been disappointing in his last two runs in Exeter and Kempton so it’s Monkfish for me.

Sure, Altior is the king around Cheltenham, a three-time winner of the Champion Chase. If he comes back to what we know he can do it will take a fair horse to beat him.

He’s been hit and miss and was second last time behind Dan Skelton’s horse, Nube Negra, at Kempton. Maybe he a bit disappointing in that one. He hasn’t had a run in a long time but Nicky Henderson said he did he did a serious bit of work in the last week which is always a positive thing. If he’s back to his form he’ll be very hard to beat.

Willie (Mullins) has Chacun Pour Soi and the quicker they go the better he is. He was very impressive in Leopardstown last time. People are asking if he can get up the hill in Cheltenham but I feel that he puts races to bed between two and three out.

Then you have Henry de Bromhead’s mare, Put the Kettle On. She won the Arkle last year and that’s always a good form guide for the Champion Chase of the following year but it’s still Chacun Pour Soi for me.

Irish horses always have a better record in the Champion Bumper and we have the first six horses in the betting this year. In Ireland we train our horses for Bumpers while in England they use Bumpers as a training guide.

It’s going to be a win for Willie Mullins with either Kilcruit or Sir Gerhard. I’d be siding with Kilcruit as he was very impressive last time. You really need to stay to win a Champion Bumper and I know Kilcruit will stay.