Stephen takes up the reins of Laois ladies u/16 team 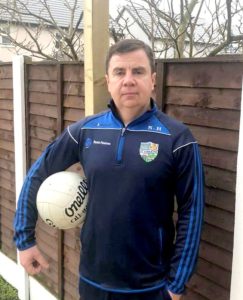 LAOIS LGFA have unveiled Stephen Hoary as manager of the county U/16 team for the coming year. The St Conleth’s club man has experience of managing and coaching both football and camogie.

Joining him on the management team will be Patrick Cummins (St Conleth’s) in the role of coach and Eavonne Donoghue (Timahoe) as FLO with others to be announced.

Stephen managed the St Conleth’s U’14s during the 2018 and 2019 season winning Féile both years and being narrowly beaten by eventual national winners in 2018.

St Conleth’s also won the Laois U/14 ‘A’ league and were runners up in championship in 2018. In 2019 they won the league and championship double and remained unbeaten while managed by Stephen.

Stephen also has a lot of camogie management experience and some of the highlights include management of Dublin U/16 team’s first All-Ireland ‘A’ title in 32 years, a host of Leinster titles at U/16 and Minor, as well as vast club and third level experience reaching four senior All-Ireland’s winning two.

On their Facebook page Laois LGFA said: “We in Laois Ladies wish Stephen the very best of luck for the coming year and are hoping we can get back on the pitch and put all his hard work into play.”