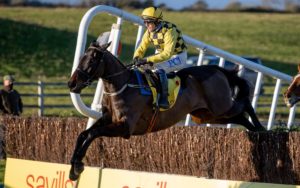 There seems to be a great deal of excitement around Alan King’s horse for this race, Tritonic. He’s two out of two and was very impressive last time out in Kempton where he won by ten lengths. He showed a great turn of foot that day and he could be very good. He came off the flat where he was rated 99. He stays well too.

The horse I really like though is another that came off the flat, Sneezy Foster’s Zanahiyr. He’s three for three and was rated 82 on the flat. He came out of Mick Halford’s Yard and is an Aga Khan horse.

He’s been very impressive, especially last time out in Leopardstown. He’s been given a break since that run. From what I hear from the stable he’s going really well at home. I think Zanahiyr could be one of our big chances of the week.

Stattler has been running really well behind some of the horses who will go for the shorter distances during the week so it will be interesting to see how they go. He’s a Ronnie Bartlett horse, and is definitely a stayer. He won at Leopardstown at Christmas, beating a mare of Willie Mullins’, Glens of Antrim. She will probably go in the Stayers Hurdle earlier in the week so that will be a lovely form guide.

Paul Nicholls has a horse here, Barbados Bucks, who has won his last three races and was very impressive last time in Kempton when he won a Novice Hurdle over three miles, which is the Albert Bartlett trip. He travelled really well and jumped super. He’s going to be hard to beat. He came from Ireland where he was second in a point-to-point. We know he stays and we know he jumps so I will probably be siding with Barbados Bucks for this one.

I think this is going to be a fascinating race with Al Boum Photo going for three in a row. The last horse to do that was Best Mate. I feel he was very impressive to do what he did last year because they didn’t go that quick. Paul Townend was in front, where he wanted to be, but he had to be because of the pace the rest of them went and he did extremely well to win from there.

They will definitely go a gallop this year with Tizzard’s horse, Native River, who won in 2018, making the running. It’s going to be a true run race and that will only play into the hands of Al Boum Photo; he stays really well.

I thought Champ had a very good run last time out for his first run in well over a year over two miles in Newbury. He is stepping up another mile and two furlongs for the Gold Cup. I’d just be hoping he doesn’t run too keen.

A Plus Tard for Henry De Bromhead stepped up massively in trip to win the Savills Chase at Leopardstown at Christmas. He is a winner around Cheltenham so he knows the track.

Minella Indo is another one belonging to Henry; he was beaten narrowly there last year and then unfortunately had a fall at Leopardstown and was disappointing next time out. Rachael (Blackmore) is favouring riding A Plus Tard and Jack Kennedy will take the ride on Minella Indo.

Kemboy won the Irish Gold Cup at Leopardstown but I heard Willie (Mullins) talking about him afterwards and he said that he had a couple of runs around Cheltenham and never really ran well. That just turns me off him. Horses know that kind of thing and sometimes just don’t like a venue, he was seventh in the Gold Cup last year when Patrick (Mullins) rode him.

Paul Nicholls says Frodon is flying, Nicky Henderson has Santini who was second last year when he was only beaten by a neck but I thought the race suited him last year when they didn’t go that quick.

I find it hard to get away from Al Boum Photo. Willie did what he usually does, one run at Tramore and then straight to Cheltenham and then maybe Punchestown afterwards. He has no miles on the clock and I think if anything will beat him, they’ll win the Gold Cup so that’s why I’ll be siding with him.

Elimay has very good form, won last time out and was second to Allaho before that in Thurles. Colreevy has won a Grade 1 already this season in Limerick at Christmas He then went to Thurles and won a Grade 2 Mares Novice Chase.

Billaway in the Hunters Chase is another who is going to be very hard to beat.

WHICH HORSE WOULD I MOST LIKE TO RIDE: I’d love to ride Al Boum Photo in the Gold Cup.