Great news for Emma as she is included in Irish panel 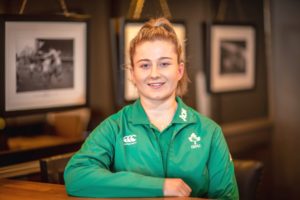 Emma Hooban prior to playing against Scotland back in 2019    Photo: ©INPHO/Morgan Treacy

THERE was a pleasant surprise for Portlaoise’s Emma Hooban today when she was included on the 35-player squad for the upcoming Six Nations championship.

Emma, who started her career with Portlaosie RFC, now plays with Blackrock College and Leinster, has already been capped seven times but has not been involved with the international side since 2019.

Emma has now been named in the full squad after being included in an extended training panel last October.

Due to the Coronavirus pandemic this year’s Women’s Six Nations will have a truncated format. The comnpetition has been split into two three-team groups.

The Championship will consist of two pools of three teams before concluding with Finals Day on 24 April.

England, Italy and Scotland form Pool A while Pool B made up of France, Ireland and Wales. Each team will play one home and one away fixture  before facing the sinilar ranked team from the other pool in a Super Saturday finals day.

All three of Ireland’s matches will be shown live on RTÉ 2 and RTÉ Player.

Ireland will open their campaign against Wales at Cardiff Arms Park on Saturday 10 April 10 with kick off at 5pm kick. The following Saturday Ireland will play host to France in Energia Park kicking off at 2.15pm kick off.

Ireland’s third game will be determined by the results and will form part of a Super Saturday on 24 April.