‘I would love to see more ex-players getting involved’ 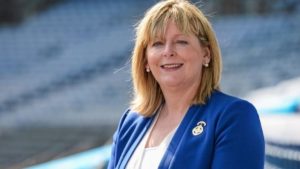 AFTER six years in the LGFA hot seat Marie Hickey can now sit back and relax, or can she, or does she want to? You might think that after serving two three-year terms as President of the Ladies Gaelic Football Association Marie would put her feet up, not at all as she remains on the national committee.

A Chemistry and Biology teacher in St Kevin’s Community College in Clondalkin, Marie is a native of Ballylinan and currently lives in Kildare. However, despite all her travels she continues to be a member of her home club, of which she was a founding member in 1983.

From a young age Marie had a love of football and once the opportunity arose to play she jumped at it. The first team she played with in her area was Crettyard with whom she won a Laois junior championship. She was to win the same championship as second time, this time with Ballylinan. As a player she also represented Laois at junior county level as well as NUI Maynooth.

And when she hung up her boots her involvement with the game did not stop, if anything it became greater. She went on to hold the role of chairpersons in Ballylinan where she also coached teams at all levels, Laois Ladies County Board where also held various positions including Registrar, Fixtures Secretary and then President of Leinster Council before she became national President in 2015.

So after such a busy and successful calling, both on and off the field of play, it hardly comes as a surprise that Marie has no intentions of just riding off quietly into the sunset.

Speaking to the Laois Nationalist this week when I put it to Marie that she might sick back and take things easy now, her instant response was: “There’s always something to do. I’ll still be on national committee and there will be plenty associated with that.”

And all that after six years at the head of the Association and three years prior to that as President Elect.

“It was brilliant to be elected and brilliant filling the role because it was a time of great change – socially through sport and through games and recognising women in sport and all of those aspects.

“My big thing when I started (in the role) was to improve the recognition for players and to improve attendance at games, and to try and get our past players back involved in coaching or administration. We made a bit of progress in some of them.”

There is no denying the fact that in recent years the popularity of ladies football has grown considerably and Marie sees that as being down to a number of reasons.

“It’s a kind of a chicken and egg situation. If you remember back to 2001 when Laois were in the All-Ireland final and even the decade before that, the football was always great at county level. It’s bringing it on at club level and getting every young player who wants to be involved given the opportunity to play and develop her skills to get to that level. That improved greatly, the club scene and the skills at that level improved greatly.

“And then TG4 covering so many games was a huge plus for us. And with the media coming more on board and doing the promotion they did really put us up there. It was really the promotion as well as the skills of the game improving that caught people’s attention.”

However, one of the greatest problems facing ladies football, in common with most sports, is keeping teenagers involved. You can see it in every GAA club, soccer club or rugby club, on Saturday mornings the club grounds are crammed, heaving with kids aged from about six to 12 years. But once the teens kick in these numbers can drop dramatically.

Marie feels the LFGA have made great strides address this problem and feels their efforts are beginning to pay off.

“It’s very hard to have statistics on that because that would be a huge study to undertake. But I definitely think the number of girls staying on has improved.

“There are so many factors involved in that whole area – girls thinking they’re not good enough, having problems with self image, there’s a whole mishmash of things there that affect that. It is something Sport Ireland did a bit of work on recently and how important it is to keep them involved at that age.

“Again it comes down to the importance of coaching and coaches knowing and being aware of these facts, being able to identify the signals when they start to appear. We did do a huge amount of work with coaches on this and if anything good has come out of this whole lockdown situation it has been the number of people that have engaged on our webinars on coaching, administration, on everything.

“There have been huge numbers attending. To add to that, the fundamentals training program in the last couple of years is the same program for the GAA and ourselves. We have incorporated and worked on that program with them because so many people at club level train boys and girls, so it’s important that everyone gets that message.”

One area Marie is delighted to see progress being made is the coming together of the GAA, the LGFA and the Camogie Association under one umbrella.

“We are working towards a federal system of governance where we technically are all under the one umbrella as a Gaelic games family. We have done a huge amount of things in recent years to bring us closer together and people probably don’t realise it.”

The most recent development has been the Foireann registration system, the GAA’s new online management system. The first phase of Foireann’s rollout happened in the final quarter of 2020. The new system replaced all three Servasport Management Systems (people.gaa.ie, people.ladiesgaelic.ie and people.camogie.ie) for all club membership and registration activities.

“We’ve all worked very hard on that to permit all members of the Gaelic games family to be able to register in the one club and the one unit. A huge amount has gone into that.

Another area of concern in the past has been the lack of facilities sometimes afforded to the ladies game.

“Having access to facilities has opened up a lot more. We’ve had our games mostly now in county grounds around the country. People just come to expect it now because it’s happening but that has to be a collaboration in order for that to happen.

“The problem of availability of grounds is because so many people are looking to use the same facility. That comes down to scheduling at club level. Where you have one-club models it can work very well. The problem for a lot of clubs is that the ladies football team or the camogie team or the GAA team are not taking players from the same pool.

“For some clubs the ladies football team could be a parish team, the men’s GAA team could be three teams from the same parish, while the camogie might be two parishes, so they are not all playing out of the one clubhouse, club grounds. That makes it all the more difficult. It’s finding a system that works, that suits everybody and that is difficult.”

Another impressive initiative now being worked on is the Gaelic Games Player Pathway. For the first time, all three associations with responsibility for the promotion of Gaelic Football, Hurling, Ladies Football and Camogie will have an aligned pathway and vision for player development.

Players are at the heart of this new initiative, with club involvement central to its success, and there will be a key focus on creating an effective player development environment.

You would have expected when the issue of the past year and the effect Covid 19 has had on the association that Marie would be full of negativity. Surprisingly, not in the least. In fact she outlines what she sees as a lot of positive developments.

“Sure, there have been a lot of difficulties along the road. It’s hard to know where to begin with it. From the positive end of things, the amount of work people have put in to their own communities – helping people, making sure training happened when allowed, making sure that when we had Covid Officers appointed that everything ran smoothly, that was the first hurdle.

“It’s never pleasant having to cancel games like the national league or school competitions. At the beginning of all this we honestly did not think we would get a championship played last year, but we did and it was great to do that.

“The priority was to play club football because everybody plays club football, so by facilitating the club we could ensure everyone was going to get to play at some level.

“The whole issue of the club window and the county window came out of that and was something that was very positive. People felt when we had club training we had everyone including the county players. And when there was the county training window, that was the time they could train. That proved to be positive.

“I think clubs had a better experience. Even though we are in the middle of a pandemic the fact that they had all of their players, everybody was at home, there was no one able to travel distances, and that kind of thing, the club probably benefitted from it.”

And then there was the streaming of live games.

“That was brilliant, you could get to watch every game regardless of what level. That really went down well and is something we definitely consider in the future because it worked so well.”

One aspect of the ladies football often trotted out is the number of males involved at administration level, or as coaches and referees at the playing side of the ladies’ game. Some would ask why cannot the ladies association be run by ladies? But it is not that simple according to Mary.

“From the female perspective, playing is a bit different to the male perspective. There are different challenges at different times. We have tried to address that and to bring it to the fore. That is one of the reasons we have the Female Liaison Officer with all county teams providing a bridge between County Board and management and to look after players needs and see what they would be.

“I would love to see more ex-players getting involved in coaching and we actually really only getting to a point now where players who played to a high standard have the time, having raised their families, to get back to giving some time back to the game. That is another area where things are different for women from men. There are different priorities and different responsibilities.”

Now as Marie looks back at her term as President, something she should do with pride although she would never admit it, there is one wee area that you might say she looks back on with some regret, that was not being able to involve herself with her native Ballylinan.

“I wasn’t able to get down as much as I would have liked. It’s a great club and from the ladies football point of view the ladies have come together as a parish team, St Brigid’s. There’s a great bunch of girls there and a great committee who are working really hard. They’re going great. I don’t think they need me down there at all now. There is a great relationship between the GAA club and the ladies football and there always has been.”