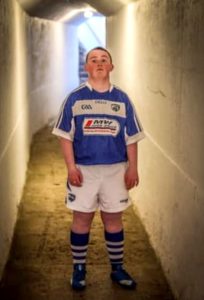 TRUST is a partnership project led by Munster Technological University on human rights and sport funded by the Council of Europe and the European Union with Ireland’s funding from the Irish Human Rights and Equality Commission.

Entrants submitted photos or videos on what “human rights in and through sport” means to them, along with a short caption explaining their choice.

Jack was photographed in the players’ tunnel in Netwatch Cullen Park back in 2018. Jack had been named as Laois mascot and vice-captain in what was a crucial National Football League game for Laois.

Laois defeated their neighbours on a 1-6 to 0-8 scoreline in a nail-biting encounter. The O’Moores went on to be crowned Division 4 champions and win promotion.

On Twitter on Saturday night Dargan acknowledged his delight at winning the award and p[aid tribute to Jack.

“Thank you all for your kind words/calls/texts on winning this award, great surprise and really appreciated,” he said.

“Some amazing photos from talented people all over the world. Thank you Jack Bolton.”

Winner of the best video entry was Ballinteer St John’s club-man, Bonnar Ó Loinsigh, who gave a powerful testimony as to how playing hurling transformed his life after arriving in Ireland as a refugee from Iraq.