Elderly in their 90s still not vaccinated in Laois-Offaly 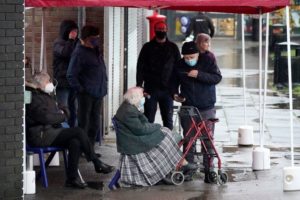 LOCAL TD Brian Stanley has raised serious concerns over the Covid vaccination programme, saying that he knows housebound people in their 90s who have still not been vaccinated in Laois-Offaly.

Speaking in the Dáil this afternoon, the Laois Sinn Féin TD said he is aware of a 97-year-old woman and a 95-year-old man in his constituency who have not received their vaccines.

He also said that his office has been unable to get any information from the HSE as to when these elderly people will receive their vaccines.

Deputy Stanley said that both people are housebound. His office telephoned the HSE Helpline but was unable to obtain information.

He told the Dáil: “I cannot get an answer regarding the mobile vaccination service and the mobile vaccination unit in Laois-Offaly. Is there such a unit? All deputies will agree there is no shortage of managers in the HSE. In fact, there are legions of them. Can one person be put in charge of the vaccine roll-out in each county?

“It is a real problem on the ground. I am telling the Minister sincerely that this must be dealt with. It is not acceptable that people who are approaching 100 years of age have not yet been vaccinated.”

Deputy Stanley also called on the government to follow the example of other European countries and seek alternative vaccine avenues in a bid to increase supply.

During a lengthy statement, he said: “If we are to emerge from the pandemic in any sort of efficient or timely manner, we need to significantly increase the supply of vaccines.

“Sinn Féin has called on the Minister to raise the matter with the European Commission and to put pressure on it to be more proactive around approving other effective vaccines.

“Other countries are doing side deals while the Government sits on its hands. Germany has done a deal with Pfizer, as has Denmark. Austria has followed suit. Slovakia and the Czechs have signed up for Sputnik, the Russian vaccine.

“What actions is the Government taking to speed up the European Commission and the European Medicines Agency, EMA, in terms of the approval of other effective vaccines?”

He also hit out at the new vaccination plan, which will see people prioritised by age rather than working group.

He said: “I refer to the announcement this week of changes to the vaccine roll-out. It shows that the Government has abandoned the plan it was pursuing as it has come to the conclusion that the plan is not fit for purpose.

“Key workers such as teachers, gardaí and taxi drivers have been downgraded. Taxi drivers who provide services for the HSE, whose situation I raised in the House several months ago, as well as special needs assistants, SNAs, who work in close proximity to others, childcare workers and essential retail workers, have not been vaccinated.

“There has been an outbreak at the Midlands Prison in Portlaoise. Prison officers need protection They have to deal with conflict in the prison daily.

“They work in close quarters with no room to socially distance and they are in a very difficult situation. Some of them have raised this issue with me.

“I refer to family carers and those who work in day services for the intellectually challenged and physically disabled. We need to try to do something to get these service workers and ensure they are safe.

“We need a fair roll-out of the vaccine. I ask that his office revert to my office with an email in that regard, today if possible, because it is a really important issue. It is a life-and-death issue.”