Latest Exhibition is the one to beat in the National 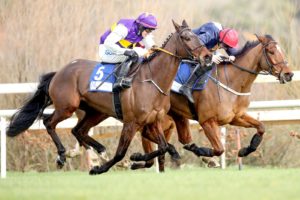 What does Fairyhouse Easter Festival mean to me. Look it’s the Irish National, it’s our version of Aintree. It’s the race I would have grown up watching as well. But it’s not just one race it’s a three-day Festival over an Easter weekend which means a lot from a family point between the Taaffe’s on my mother’s side, who always had plenty of luck in it with Arkle winning it. My grandfather, Toss Taaffe won the Irish National twice as well so it’s always been a special race in my family.

I have ridden in the Irish National maybe ten times myself but the best I ever achieved in it was third on a mare called American Jennie behind Butler’s Cabin. My Dad too, would have ridden the race but unfortunately neither of us won it.  It was always a great atmosphere with quite a number of visiting horses attending and a few of them won it in my day including Butler’s Cabin which was an English Horse.

It’s a great pot with plenty of money up for grabs in the race. Ah it’s just a very special day with a big crowd normally. There is a big racing community around Ratoath with the likes of Tommy Carberry and Noel Meade and now Sneezy Foster not too far up the road. Tommy won the National with Bobbyjo who actually beat Ted Walsh’s Papillon in 1998 and both then went on to win the Aintree Grand Nationals in the following years.

If you are from around that area you want to win this race as this is your local track. Most of those locals have won the National at one time or other including Paul, Nina and Philip Carberry.

The Irish Grand National was always a great race for horses going on the win the Aintree Grand Nationals because as well as Bobbyjo and Papillion, Numbersixvalverde won the Irish National in 2005 with Ruby Walsh and then I won on him in Aintree in 2006. Horses that run well in the Irish National or even win it would then go on and run well or even win it in the following year.

Just like for Aintree you need a horse that stays to run in the Irish National. You need a horse that jumps well too as they’re big fences.  They’re fair but they take a bit of jumping and if you have a good horse that can jump then it’s no problem to him. Fairyhouse is a real stiff track though while Aintree is a flat track. You have your 40 runners in Aintree and about 28/30 in Fairyhouse but you could be on the best jumper in either race but something could fall in front of you and you have to deal with that just like any other race.

You’ll have horses that have been lining up for this race all year. You have a few National Trials and the thing about the Irish Grand National is that novices always get on very well in it. You get the novice horses that have been running in their graded races or running in lower class races and then thrown into a handicap for the first time and I always find that they have a great record in the race.

If you go by the betting so far this year that seems to be the same situation as the first eight in the betting are all novices.

Latest Exhibition is a horse that travels well and the trip will be no problem to him. First time in the handicap he’s in with 10 – 13 which I think is a great weight for him. He’s been backed up to 11/2 and to me that would mean that they are more swaying for the National for him.

Joseph O’Brien’s Sempo is second favourite in the race right now. He was second last time out in Navan in a Grade 3 and he’s in at a nice weight of 10st so he’ll have a massive shout as well. Longhouse Poet for Martin Brassil is another novice and he won a Beginners last time but has loads of experience in Chasers and has had five or six runs over fences. He has only won once but has run around the big tracks.

Home By The Lee is another one of Joseph O’Brien’s and he too has a nice weight again. He too has been running in graded races and is back into a handicap company. He was third behind Envoi Allen in Fairyhouse in a Grade 1 two runs back and was beaten 12 lengths but you’d like to think that would be good enough for a big race like this.

The horse that won the Thyestes in Gowran Park with Jack Kennedy, Coko Beach, won a Grade 2 Novice Chase in Navan in his last run and he’s on an upward curve. He’s in with a rating of 150 and has 10 – 10 on his back and I feel that any horse that is under 11st has a great chance in this race. It’s a three-and-a-half-mile race so weight obviously will catch up on the horses going that distance.

Galvin is entered in the race at the moment but I’m not sure if he is going to go for the National. He was very impressive in Cheltenham and he’s a 12/1 bet in this one. He is bang on 11st and hast to have a massive shout if he goes in this one.

Then you have Tiger Roll. Is he going to go in this one or is he going to go for the Bet Fred Bowl? We’ll have to see what Gigginstown connections are thinking about going for a handicap when they said that they wouldn’t run him in an English Handicap because he had been rated too highly. He’s 163 here and I think he was being rated maybe 167 in England, so he’s going to carry top weight here. You’d imagine if he did run here, he’d be a great ride for a claim ride so you’d have to respect him as well.

Having said all that, it’s the Irish Grand National so you can stick your proverbial pin on the Race Card and come up with the winner but I’d be definitely leaning towards a novice for the race.

From a Kildare point of view, as well as Martin Brassil’s Longhouse Poet we have Peter Fahey’s The Big Dog and he won a National Trial in Punchestown last time out over three and a half miles so we know he’ll get the trip. He beat a horse called Screaming Colours who ran in the Midlands National in Uttoxeter last Saturday and finished fourth which was probably slightly disappointing but the Big Dog has a big chance and he has a nice weight as well.

Barry Connell who trains in Nurney has Espanito Bello and won a Beginners Chase in Naas and actually beat Coko Beach and Longhouse Poet and then was second to Coko Beach in a Grade 2 last time out in Navan. He is with a nice weight of 10 – 7 so I’d imagine if as expected Kildare jockey Mark Bolger rides him, he’s be in with quite a chance at 16/1. I think Ted Walsh’s Any Second Now will go for the Aintree National.

If I was asked to call it now I’d find it hard to get off Latest Exhibition as he has been running up against Monkfish all year and was second to him twice in Punchestown and he won a beginners there also. He always seemed like a horse that could be a Gold Cup horse in time but they decided to keep him away from Cheltenham this year and to concentrate on Fairyhouse so he’s going in a fresh horse and I fancy him to do the business.

Without knowing the full picture at this stage, I still thing the Mares Race on Easter Sunday. There’s a good few English trainers who has horses entered at this stage. We’ll have to wait and see if they will travel over or not. It would be nice to see them come over. It is very interesting for us to see the new programme for the mares which is making them very valuable at the sales. It’s bringing mares into a new league and they are being made valuable again whereas if you went back 10 or 12 years no one really wanted to buy a mare because there was no programme for them. The new programme is brilliant for mares and there’s plenty of prizemoney to be won by them.

Easter Sunday’s race is a real nice Grade 1 race. Shark Hanlon’s mare, Sky Ace, ran a cracker at Cheltenham and she is certain to run in this one. There’s also a mare of Willie Mullins, Echoes In Rain, which probably needs to improve on ratings but she won in Naas last time in a Grade 2 Hurdle by eight lengths beating Cheltenham County Hurdle winner, Belfast Banter, in the process. On form it would be hard to get better than that.

For the Gold Cup we will have to see Envoi Allen turns up in this race and if he does, he’s going to be very hard to beat. Every horse can fall but it’s how they learn from the setback that matters. It would be nice to see if Energumene came to take him on in this one. Sneezy Foster’s Andy Dufresne is another possibility for the race. He missed Cheltenham presumably to go for Fairyhouse.

I can see a good few running in the Gold Cup if Envoi Allen is not there but if he turns up, I can see a small field taking part. It should be a cracking race one way or another.

I am really looking forward to a great festival of Irish racing over the Easter weekend.