Tom Cox: Eye on the past 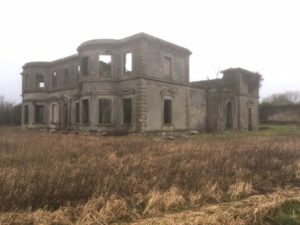 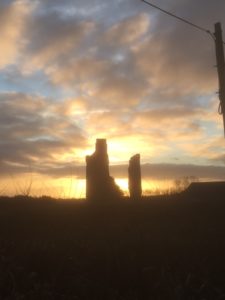 Sunrise in the townland of Morett and its iconic Tower House

Did you know there are 1,111 townlands in Co Laois, according to the townlands.ie website.

In his monthly column, Tom Cox explores some of these well-known townslands as he cycles his way around (within his 5km restrictions), discovering the beauty that is right on our own doorstep!

TOWNLANDS have been exercising me lately. Or, more correctly, I have been exercising in townlands. Since we’ve been restricted to 5km for leisure purposes, I’ve been cycling round in 5km circles, so to speak. And whereas that might seem restrictive, it’s made me appreciate my local routes all the more and has brought me up byroads (and one cul-de-sac) that I might never have explored before. Restricted or not, I managed to clock up 645km in the month of March.

And from 12 April, under the latest plans for the cautious easing of restrictions on the 5km leisure limit, the county will be my oyster, so to speak. Though the truth of the matter will likely be that I will not stray too far from the sight of Killone Hill or The Rock of Dunamaise.

What got me to thinking about townlands was a recent series of programmes on RTÉ fronted by John Creedon. ***John Creedon’s Atlas of Ireland*** finds him following in the footsteps of John O’Donovan, a topographer employed as part of the Ordnance Survey of Ireland, commissioned in 1824.

O’Donovan joined the survey team in 1830 and remained in its employ until 1842. Though there had been a number of attempts to map the country over the course of time, this was by far the best-resourced attempt, and is the benchmark, if you like, for all future surveys.

By 1842, a series of six-inch to one-mile maps covering the entire country had been produced. Given that the numbers employed on the survey ran to thousands, the fact that John O’Donovan’s name is one of the first that springs to mind whenever place names of Ireland are mentioned is a testament to the man’s passion for his subject and his expertise. What elevated John Creedon’s programme was a matching passion for the subject of place names on his own part … always a pleasure to watch when someone is on their game. The problem with television, of course, is that they much prefer to pick the juiciest of fruit because it makes for better viewing. That would explain why JRR Tolkein got quite a bit of air time while John Creedon made valiant efforts to squeeze a hobbit or two out of the Burren, a place Tolkein had spent some time.

To be fair, with better than 63,000 townlands countrywide, you’d have a better chance of winning the Lotto than getting your townland mentioned on any TV programme, unless you can come up with some juicy snippet to attract the media. But that’s not the point. Every townland is there for a reason. It has history in its formation and history in its name. And within townlands, there is also a history.

You can read the full version of Tom’s column Eye on the Past, in this week’s Laois Nationalist, on sale from tomorrow in all local stores or online.