Employers call for the deduction of union subscriptions from teachers payroll . 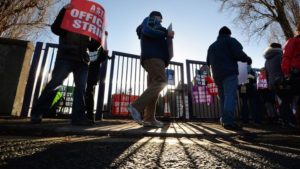 ISME, the organisation that represents small and medium sized enterprises said that it was concerned over what it terms as “the coordinated threats” from a number of unions to explore any and all options, up to and including industrial action as a result of the National Immunisation Advisory Committee (NIAC) policy advice to prioritise vaccine delivery on an age-related basis.

In a statement the organisation said that it is “well aware of the pressure that unions are under from some quarters to seek vaccine priority. We have had to deal with similar requests from employer groupings in particular sectors among our own membership, but we have politely refused to entertain them. To do otherwise would open a free-for-all, where Government is forced to deal with the loudest, most threatening groups, rather than those presenting the greatest clinical need.

“While the latest NIAC advice to prioritise vaccination on an age basis may be imperfect and blunt, it is also objectively fair, it deals with the most at-risk citizens first, and it is least prone to circumvention.

“In any event, ISME does not believe a majority of teachers would support industrial action on this issue, but we also believe that the public and business reaction to it, even if only threatened, would be negative and vociferous.”

The organisation said: “Although teachers, like all workers, enjoy the legal right to withdraw their labour, this does not mean that it is proper or morally defensible to do so in a case such as this.

“ISME represents businesses such as essential retail, cleaning, warehousing, distribution and food and medicines manufacture, which have continued to work non-stop throughout the pandemic despite the absence of vaccines. These people would rightly view any attempt to close our schools as both precious and reprehensible.

“Similarly, those hundreds of thousands of workers who have been furloughed on the PUP would look with incredulity and justifiable anger upon a cohort who have suffered no loss of income refusing to work because they were not prioritised for vaccination.”

The statement said: “If the Minister for Education is presented by unions with any form of threat, express or implied, to withdraw teachers from our schools over the vaccination issue (which is the absolute right of those teachers), she should inform those unions that her Department will immediately cease the deduction of union subscriptions from payroll, which is her Department’s absolute right.”