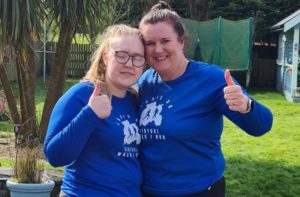 THE Laois Virtual 5k was a runaway success, as hundreds of people around the world took up the challenge in aid of Portlaoise Athletics Club and Laois Guide Dogs.

The five-day event raised a remarkable €4,000, which will be divided evenly between the two important causes.

About 700 runners and walkers took part in the event, which was organised by Laois Sports Partnership (LSP) in association with Portlaoise AC.

The organisers thanked everyone who supported the run/walk from 17 to 21 March, which attracted individuals and families from all over Laois, Ireland and internationally, from as far afield as California.

Funded by Laois Sports Partnership through the Healthy Ireland Keep Well Campaign, the event encouraged people of all abilities to take part and run/walk/wheel the 5km. The first 380 to register received blue running tops which were posted out in advance, turning the online feed into a sea of blue.

Portlaoise AC supported people for the final six weeks, as they prepared to complete a 5k at their own pace. Couch to 5k training plans, through experienced coaches from the club, were available for beginners to advanced athletes.

Proceeds will support activity programmes for people with visual impairments through LSP and Portlaoise AC, as well as helping Laois Guide Dogs.

Posting online during the event, many people highlighted the sense of community fostered by the Virtual 5k.

One commented: “I have completed many 5k walks over the years but nothing like the virtual 5k. To say I felt pride is an understatement. For the first time in over a year, I could feel that sense of community in the air.”

A Californian with Laois connections, who took part with his daughter and dogs, said: “My daughter Emily and I were honoured to join in the event.  We participated remotely from California, along with our two Goldens Daisy and Lady.

“We are descendants of the Cullens of Abbeyleix.  My wife Katie and I had a magical visit to Laois two years ago and stay in close contact with Trudy Mhic An Earla and Síle Headen. We definitely plan to return.

“It was truly an honour to participate in the 5k run and support such worthy organisations.  Although our feet were in California, our hearts were with all of you in Co Laois!”

Another said: “We walked with our heads held high, a smile on our face and waved to so many in their blue T-shirts. With the sun on our backs, we started out supporting Laois Guide Dogs and Portlaoise Athletics Club but by the end it meant so much more. Thank you.” 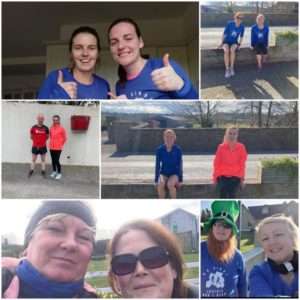 Thumbs up for the Laois Virtual 5k 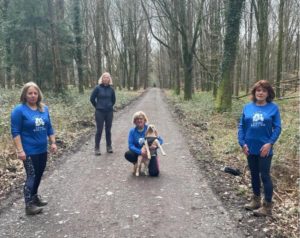