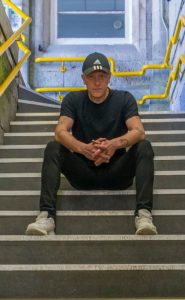 Filmed around Portlaoise Wally said the song was for “everyone in difficult times.”

The video was shot and produced by Wally and photographer Gilly Guilfoyle with backing vocals on the chorus by Oisin Nolan.

While filming the video two young men agreed to take part in it as well as a young child whose father was delighted to allow him to take part and appear riding along on his scooter.

Leaving a message on his Facebook page ‘Wally the Rapper Music‘, Wally said: “If you feel down, please ask for help.”

You can log on and see the video by clicking here.