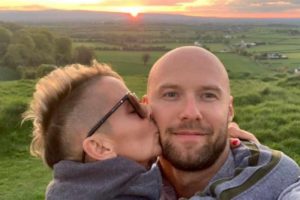 Kamil Ossowski and his partner Sabina

A PORTLAOISE couple have defied near-impossible odds in their fight against a shock cancer diagnosis.

Despite chances of only one in five million, a bone marrow donor has been found for Kamil Ossowski (38) following an international appeal.

Kamil, who has an extremely rare type of bone marrow, was notified of a 95 per cent match in March and a transplant has been scheduled for 5 May.

It is wonderful news for the Polish native and his partner Sabina Berth, who is a fitness instructor at the Killeshin Hotel in Portlaoise.

After his first round of chemotherapy at St James’s Hospital in Dublin, genetic tests unfortunately revealed that his specific bone marrow is extremely rare. He had just months to find a life-saving donor.

Sabina launched the urgent appeal in a bid to locate a donor before it was too late. Her online page ‘Save Kamil’s Life’ brought a huge response from around the world, with people from Poland to Portugal and from Norway to the USA signing up for a bone marrow register.

When she launched the appeal, Sabina said: “Kamil is a great father to five children who love him terribly and he is also a good and warm person whom many have had the chance to meet. He lived a very healthy lifestyle. He played sports virtually every day, trained martial arts, cycled, also cared about diet and truth be told was the last person who would seem to get sick.”

Originally from Poland and now happily settled in Portlaoise, Sabina recalls that the terrible diagnosis came like a bolt from the blue just before last Christmas.

Sabina said: “Unfortunately, after three weeks we received genetic results, which indicate that a bone marrow transplant is the only rescue for Kamil. But that’s not the worst news. Kamil’s bone marrow is very specific and in the global database of bone marrow donors, made up of 50 million people, his chances of finding a match are one in five million. Chemotherapy can’t help Kamil, so the donor search has begun.”

Sabina appealed to people to come forward to have their blood tested, to see if they were a match. Anyone aged 18 – 45 in Ireland can join the Bone Marrow Registry online.

Their bone marrow type and details are recorded in the global unrelated registry and they are contacted only if they are identified as a possible match for a patient in need of a transplant.

Sabina pointed out that, even if they did not prove to be a match for Kamil,  people registering to the bone marrow database could save others who require a bone marrow transplant.

As well as the extraordinary news that a rare match has been found for Kamil, against overwhelming odds, the couple is extremely grateful for the huge response to the appeal, which has meant that matches can be located for other people in need of life-saving bone marrow transplants.