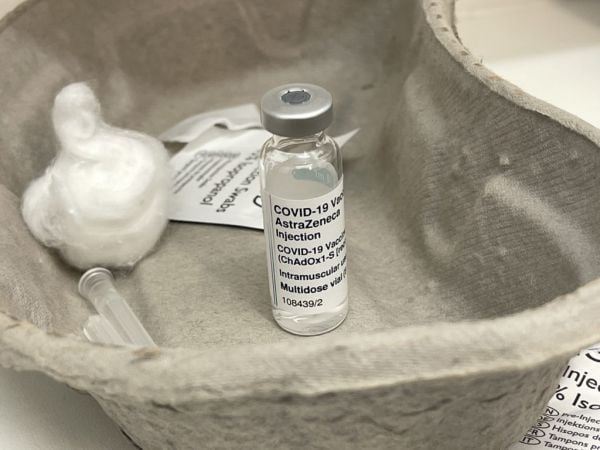 The first Irish case of a very rare blood clot in a person after vaccination with the Covid-19 AstraZeneca vaccine is being investigated in a 40-year-old Dublin woman.

The Irish Times reports that the woman is being treated at the Mater Hospital for cerebral venous sinus thrombosis (CVST), a blood clot in the brain.

She is in recovery and is expected to be discharged in the coming days.

State medicines watchdog, the Health Products Regulatory Authority (HPRA), confirmed it had received “a case of interest associated with the AstraZeneca vaccine, which describes CVST, an unusual clot in the brain.”

This is the first case of the rare blood clot following vaccination with the AstraZeneca jab to be reported to the regulator. The HPRA is carrying out further investigation and would not make any further comment on the case for confidentiality reasons.

The sister of the Dublin woman, who asked that her identify be protected, contacted The Irish Times about her sister’s case because she was a healthy 40-year-old woman who suffered severe headaches after receiving the AstraZeneca vaccine last month.

She said her sister was “horrendously sick” with flu-like symptoms and was bed-bound for two days after receiving her first dose.

“After the two days she didn’t feel 100 per cent right … she started to develop these headaches and we were all putting it down to being a bit of stress, migraine, stuff like that but it just wouldn’t go away,” she said.

After visiting her doctor, the woman was sent straight to the Mater Hospital.

The relative said her sister, who works in healthcare, was told she would be out of work for three months, that she would not be able to drive for six weeks and that she would have to live with a relative for weeks or months for observation.

On Tuesday, the EMA concluded that there was a possible link between the AstraZeneca Covid-19 vaccine and rare blood clots in the brain in people who have received the vaccine.

Despite this finding, the EU regulatory agency still concluded that the overall benefits of the vaccine outweigh the risks of a very rare blood clot.

The National Immunisation Advisory Committee met on Thursday to consider the EMA’s finding. It is consulting with EU colleagues and is considering whether any further advice should be issued to the Department of Health.