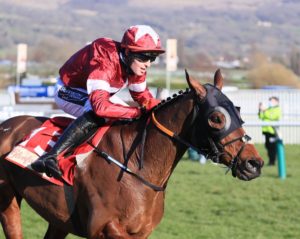 The Irish don’t have as big a team going to Aintree as we did to Cheltenham with Punchestown so close. We have two Grade 1 races on Day 1 on Thursday, the Aintree Hurdle and the Betway Bowl where Tiger Roll now runs and where I think he certainly has a big shout. He absolutely skated up in Cheltenham, winning by 18 lengths. He beat a horse that was in good form too in Easyland and he beat him easily.

The ground is drying out at the moment, which will help him and if the handicapper is right then he should be there or there abouts as he is going there a fresh horse. Cheltenham form is going to come into reckoning here but the English might get a few winners with less Irish horses going over.

We also have the Foxhunters on the Thursday and there should be a few Irish horses in that one too with Billaway for Willie Mullins, second in Cheltenham, is a likely contender if he goes over. All the horses that ran in the Hunters Chase in Cheltenham should all be turning up again but at least the Amateurs are getting their day in Aintree and that’s their Amateur Grand National.

If I was to pick a Nap for Thursday, I would probably go with Tiger Roll. It’s a shame he’s not going for a third Grand National. I hope he puts on a good show and if he does win, they’ll realise then that the handicapper did get it right and maybe he should be running in the Gold Cup every year instead of the Grand National.