Emma in line for her seventh cap 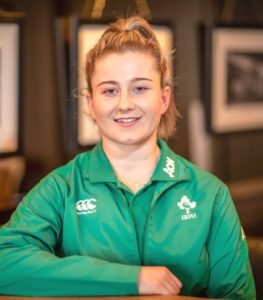 But the good news from a Laois perspective is that one of two changes to the replacements includes Emma Hooban.

The former Portlaosie RFC player missed out on the squad for Ireland’s opening round defeat of Wales but now looks set to win her seventh cap against France.

This game is going to be a much tougher assignment as the French side crushed Wales 53-0 in their opening game of this year’s championship. Ireland too looked impressive when accounting for Wales 45-0 in Cardiff but in contrast France are semi-professional while Ireland are amateur.