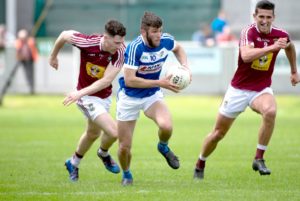 The draw for the Leinster Senior Football Championship took place this morning and Laois, who got a bye into the quarter-finals, will face Westmeath in the last eight round.

Laois and Westmeath met just last October in round six of the National Football League when the men in maroon recorded a resounding 1-18 to 0-13 victory.

However, the last championship of the pair in 2019 saw Laois squeeze through to semi-final meeting with Meath. In a game that lacked any real championship atmosphere, lacked bite and, at times bordered on the tedious, Laois had two points to spare at the final whistle.

For the draw Laois, along with Dublin, Kildare, and Meath received quarter-final byes as a reward for reaching last year’s semi-finals. Six of the seven remaining counties were drawn in preliminary round games with one going straight through to the last eight.

The draw for the first round is Offaly v Louth; Wicklow v Wexford and Carlow v Longford with Westmeath getting the bye to the quarter-finals.

The semi-final draws take place after the quarter-finals are decided.

Like last year, counties will have no second bite of the cherry as the championship is straight knock out with no qualifiers.

The Leinster final is down for decision on 31 July or 1 August.