‘There’s plenty of drug dealers out there who would love to take your money’ – Judge tells defendants. 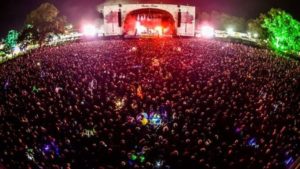 A total of €22,200 was donated to the Portlaoise District Court Poor Box when 87 people came before it arising from drug offences at the 2019 Electric Picnic weekend.

The type of drugs seized from the defendants included MDA, Cannabis, Cocaine, Ecstasy. LSD and Ketamine.

Of the 87 who were summoned before the court seven were women.

Some of the mainly young people who attended were accompanied by their parents. On a number of occasions when the defendants parents were not present Judge Catherine Staines asked if their parents knew that they were in court on drugs offence? On one occasion she asked a member of the gardaí to phone to find out if a young man’s parents knew that their son was in court? The garda returned telling the judge that the man’s mother knew.

As is the customer of Judge Staines those with no previous drug convictions were offered an opportunity to donate €300 in exchange for escaping a criminal conviction with 71 of the people choosing to take up the offer.

Judge Staines described this offer as the “old regime” because earlier this year she indicated that from now on that choice would no longer be offer for first time drug offenders.

She told the court last week: “If the Electric Picnic goes ahead this year, or next year, I won’t be striking out the offences and will be ordering people to pay €400.”

Seven defendants had their cases adjourned to allow them time to come up with the €300. Three failed to appear and had bench warrants issued against them, while six people had previous drug convictions and were so convicted of possessing drugs at the Electric Picnic and each fined €100.

Judge Staines warned a number of the defendants of the dangers of drugs informing them that one MDMA tablet could cause a psychotic episode. She also asked some if they knew how cocaine was harvested and the killings South American cartels and Irish criminal gangs go to selling the drugs and how people are contributing to it by buying from these drug dealers.

She told one young man who came before her for possessing MDA: “You could have been buying rat poison for all you knew.”

She warned young professionals who came before her: “There’s plenty of drug dealers out there who would love to take your money,” and advised a number of people, “will you ever cop on. You don’t need drugs to listen to music.”