Met Éireann is predicting wet and cold weather conditions ahead for the coming weekend. 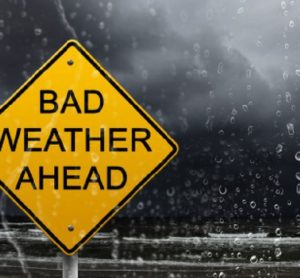 The national weather forecaster says the we can expect cool with a mix of sunshine and daytime showers to begin with and cold by night with some late season patchy frosts with an area of low pressure looking set to move in across the country on Sunday night into Bank Holiday Monday, bringing some wet and windy weather for a time.

Today’s showers in some places will eventually die away early tonight to leave the rest of the night mostly dry with a mix of cloud and some clear spells. There is a chance of a few passing light showers overnight with lowest temperatures of -1 to +3 degrees Celsius, with a slight frost in some places and a few pockets of mist forming in near calm conditions.

Tomorrow Friday will start off mainly dry with good spells of sunshine. Scattered showers will develop in the east in the morning and will track westwards through the afternoon. Highest afternoon temperatures of 9 to 12 degrees Celsius.

There’ll be some lingering showers to begin on Friday night, but these will soon die away with lowest temperatures of -1 to +3 degrees, with a touch of frost in places.
The mist and fog will clear early on Saturday morning and it will be mainly dry to begin with sunshine. Cloud will increase with scattered showers developing, though they won’t be quite as heavy or as widespread as the previous couple of days. Highest temperatures of 9 to 12 degrees in light to moderate northerly or variable breezes.
The showers will die away early in the night to leave a mainly dry night with clear spells with lowest temperatures of 0 to +4 degrees.
Sunday will bring a mix of cloud and sunshine with temperatures between 9 to 12 degrees .
Sunday night will be dry in all areas to begin and it will be rather cold at first. However, it will turn less cold overnight with winds increasing fresh to strong and rain pushing in becoming heavy at times. Lowest temperatures early in the night of 1 to 7 degrees.
Bank Holiday Monday will be a wet and windy day. Persistent and at times heavy rain will become widespread through the morning and early afternoon, with some bright or sunny spells following, but with showers or further longer spells of rain. There’s a risk of some thundery bursts. Highest temperatures of 9 to 13 degrees.