‘When I ring them they tell me it’s logged to be done, but won’t tell me when it’ll be done’. 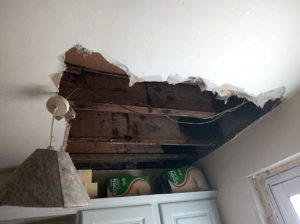 The hole in the kitchen ceiling of Ms Bland’s house which she claimed fell in due to a water leak in the bathroom.

A Mother of three has said that she has been left without the ceiling in her kitchen since Good Friday, 2 April after claiming it fell down due to a leak in the upstairs bathroom.

Patricia Bland from Parnell Crescent in Portlaoise said that while the family were watching TV they got an awful fright when part of the kitchen ceiling caved in and water poured down the side of the wall.

She said: “We didn’t know what had happened. There was an awful crash. There was ceiling plaster all over the floor and the water was coming down onto the floor and the electrical light fitting. “I rang the council first thing on Saturday morning and they sent two lads out. One was a plumber, I think, who stopped the leak. Before they left, they told me to be careful walking on the bathroom floor as it was very unsound without the ceiling underneath it.

“Now I’m left with no ceiling in the kitchen and despite me phoning the council numerous times since, no-one has been out to repair it.

“When I ring them they tell me it’s logged to be done, but won’t tell me when it’ll be done. My son got an electric shock in the kitchen the other day when he was putting in a plug. It’s now a health and safety issue. I’m told the house does not come up to EU standards and that the council are supposed to have it at that standard.”

Ms Bland said: “This is not the first time there has been a leak in the bathroom. The last time was about four years ago, when the leak destroyed the bathroom floor, which was rotten. They put down new timber flooring and that was it. They never replaced the kitchen ceiling. The wooden cross-beams and floorboards holding up the bathroom floor are rotten as well.”

She said: I also was in court with the council around the same time and the judge ordered the council to find alternative accommodation for me and my family.”

“I’ve three children and I’ve been in the house now for 15 years. I’ve had problems with the electrics and plumbing and with dampness in that time. I’ve just had enough at this stage. I’m not in rent arrears. I just want out for the sake of my children to grow up in a decent house,” said Ms Bland.

Asked to reply to Ms Bland’s claims, a council spokesperson said that it was not its policy to comment on an individual’s case.