‘I am strongly advocating permanent structures to ensure that people are able to get cover once the scheme has been constructed’ – Brian Stanley TD. 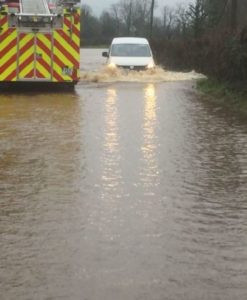 Deputy Stanley said: “This scheme has to be got right to ensure we never again witness awful flooding similar to 2017 when over 80 properties were flooded.

“A number of options have been outlined and it is important that the most effective one is selected. I believe this to be option 2 (b) which involves permanent embankments and flood walls and barriers upstream. This option would protect between 80 and 100 households.

“I raised the issue of insurance cover for householders, as problems have arisen in other parts of the country where flood barriers were demountable. So, I am strongly advocating permanent structures to ensure that people are able to get cover once the scheme has been constructed.

“I have questioned the timelines for the scheme. Laois County Council is committed to starting construction work starting in late 2023, with the contract works being completed within a 15-month period and has given a commitment to move through the five stages of the process as quickly as possible.

“I am encouraging local residents to avail of this opportunity to solve this problem once and for all.”