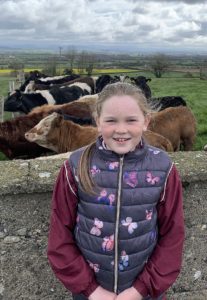 Clodagh George from 4th class  in Arles National School, who was the regional winner and Leinster champion in the FBD Farm Safe Schools competition

THERE is a new Leinster champion in Laois.

Clodagh George, a fourth-class pupil at Arles National School was recently announced as the Leinster Regional Champion in the FBD Farm Safe Schools competition. Clodagh was nominated for the award by her teacher Eve Holohan because of her expert knowledge on farm safety.

The regional champions were selected after being nominated by their teachers and will be awarded a certificate of achievement and a family pass to Dublin Zoo, sponsored by FBD.

The judges said that Clodagh, along with the three other regional winners, demonstrated excellence, innovation and commitment to improving farm safety awareness as part of the pilot programme and had gone above and beyond what is expected of them within the programme.

“They are passionate not just about farming but about making sure the message of farm safety is included and very much part of the conversation in their classrooms, at home and in their community,” said the judges.

Turning to the Leinster title winner, the judges said: “Clodagh’s great love of farming and knowledge of all things agriculture has really inspired the children in her class to take an active role in promoting health and safety on their farms and in the local area.
“Clodagh has proven that farming is not just for the boys by demonstrating how everyone has an important role to play in making our farms safe. She has gone above and beyond by creating videos, taking pictures and sharing stories of her life on the farm.”
Farm Safe Schools co-ordinator and AgriKids founder Alma Jordan explained what made the winners stand out from the crowd.

“We received a huge volume of entries for these inaugural FBD regional awards and it proves the ability and capability of our children to change the culture around farm safety. The winners have clearly demonstrated their passion for this topic and their willingness to share their learnings at home and with their classmates. They are growing the farm safety conversation and this is exactly what Farm Safe Schools is all about.”

FBD chief commercial officer John Cahalan explained why this aspect of the programme is so important.

He said: “The Farm Safe Schools programme not only empowers our children to prioritise safety but also champions those children who are passionate about the topic and have the potential to enact real change.”

IFA President Tim Cullinan said the programme is playing an important role in changing the culture around farm safety.

“The school setting – whether in the classroom or remotely – is an excellent approach to reinforce an essential message. Recognising champions in the classroom instils a message the children can take with them through their lives,” he said.

Agri Aware chairman Alan Jagoe said: “The programme sets out to create learning and understanding on the topic of farm safety to younger children. These regional award winners are a testament to the talent, tenacity and potential our children have in creating a safer future on Irish farms. I want to thank their teachers for bringing the programme into the classrooms and for recognising the champions in their class.”