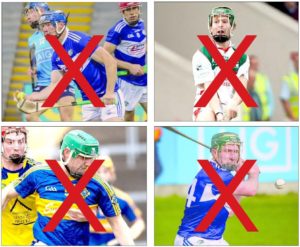 From top clockwise – Stephen Maher, Mark Kavanagh, Willie Dunphy and Ronan Broderick who will all most likely miss all this year’s hurling action due to injury

FACING into a new national hurling league will always be a daunting task, but when you are a new manager whose preparations have been hampered by a pandemic, well you have to wonder have the gods conspired against you.

This is the task facing Seamus ‘Cheddar’ Plunkett as he prepares his panel for the league opener away to Wexford on Sunday. And as if all that has not handicapped his preparations enough, he also must face the stark fact that he will be without five players that most probably be in the starting line up – Stephen ‘Picky’ Maher, Willie Dunphy, Ronan Broderick, Eric Killeen and Mark Kavanagh.

“We’re certainly without Mark Kavanagh, Ronan Broderick, Eric Killeen for the year, We’re probably without Willie Dunphy, Picky Maher for the year as well, both had operations in the past couple of weeks and John Lennon is weeks away as well,” said Cheddar when speaking to the Laois Nationalist.

“You’d probably say the six of them are probable starters so having to replace six players on a 15 man team that’s the real difficult part of it.”

On the positive side he said: “Charlie (Dwyer) and PJ (Scully) are back and Ciaran Collier is back hurling as well. It’s going to be a case of integrating those back into the team.”

But being the man he his Cheddar will not be making wholesale changes to the panel just for the sake of it, far from it in fact.

“The panel we had we didn’t make any changes to it. I just didn’t think it would be fair to do that without seeing them hurl. How can you tell a young Laois hurler who is completely committed to playing for Laois, and has maybe done so in 2020, and just leave him off the panel. I didn’t think that was fair. The panel that we have are committed and unified and that’s what we’re going to go for in 2021.

“On the other side of that, I will be looking at club players and the minor and under-20 teams this year. Already there are a lot of players who have contacted us about wanting to be considered, so there will be serious competition in the panel in the next 12 months and I’ll be looking at that.

“I would know a lot of the players anyway. It is quite encouraging that so many players have expressed interest in joining the panel. But going back, the panel was there and it wouldn’t have sent out the right message to hire a gun to discard players whom you hadn’t seen play.

The people on the panel have a chance this year to stake their place on the panel and the team for next year and going forward for however long we will be there. And there will be young players coming into the set up that we will always want to look at and try and develop into county hurlers.”