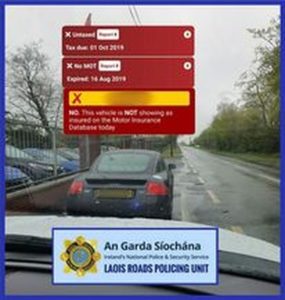 The Audi that was seized in Portlaoise today

A FOREIGN-REGISTERED Audi has been seized by gardaí near Portlaoise after breaking the speed limit on the Stradbally road.

After stopping the high-powered vehicle for speeding on the N80 outside Portlaoise today, the Laois Roads Policing Unit found that it had no M.O.T since August 2019.

The car was also out of tax since October 2019 and was not showing up as being insured. Details of the speed recorded were not released by gardaí.

The vehicle was seized at the scene and has been detained under Section 41 of the Road Traffic Act, while gardaí carry out further investigations into the driver.